In search of the artist with the owls

As “Switzerland’s memory”, the NL also collects, catalogues, preserves and provides access to publications on Swiss art. If you go in search of the famous Swiss “owl artist” Celestino Piatti, you will find plenty in the NL’s collections, which contain many of the books and posters he designed, as well as publications about his life and work.

Prominent black lines, strong colours and the recurrent motif of the owl with the big, watchful eyes – this is the unmistakeable style of Celestino Piatti, who would have celebrated his 100th birthday in 2022. The first Piatti owls found their way into children’s bedrooms in 1963, with the publication of the first picture book by Switzerland’s Artemis Verlag illustrated by Piatti, entitled “Eulenglück” (The Happy Owls). The visual language of the owls’ eyes spoke to readers far and wide. The French language version, “Bonheur des chouettes” came to bookshops slightly later, in 1967. The book was subsequently translated into many languages and Piatti’s friendly owls still bring joy to young and old alike. 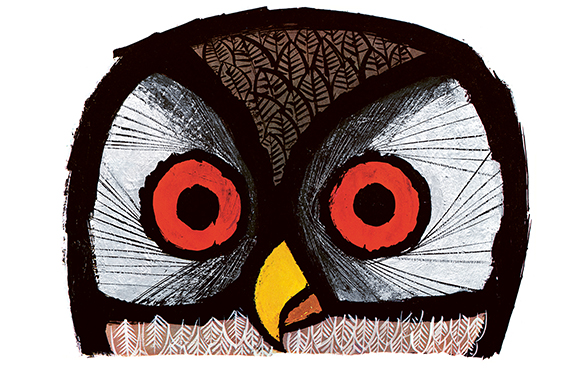 Illustration from the picture book “The Happy Owls” by Celestino Piatti, 1993

Owls crop up repeatedly in Piatti’s work: in children’s books, as a motif in posters, in prints, paintings, and as commercial art on objects. What fascinated Piatti about owls? In an interview published in the magazine Die Frau in October 1969, the artist said “I’m haunted by this animal, particularly because of its eyes. Nearly every one of my drawings has an eye in it somewhere. I find them fascinating and they have a special meaning for me”. In the Schweizer Illustrierte in March 1992, he said that “You can draw an owl a thousand times but you can never find out its secret. Their faces are flat and in that way they are very similar to humans. The eyes can show everything: joy, sadness, pain, earnestness.” The owl appears as both a bearer of secrets and a conveyor of meaning.

Piatti was born a hundred years ago, on 5 January 1922, near Dübendorf. He completed an apprenticeship as a graphic artist in Zurich, before undertaking further training in Basel and dedicating himself to commercial art.

Piatti took a simple and pared-down approach to his work. The black contours of the motifs and coloured areas are often reminiscent of glass paintings. The symbolism of the works aligns artistic expression with content. As Piatti explained to the Schweizer Illustrierte: “The notion of the symbol requires a simplified depiction and the contours reinforce this simplicity. A simple style is enough.”

He worked intensively on designing posters, which were among the first commissions he carried out in his studio from 1948. The posters feature clear central motifs with a pared-back and abstract style.

Animal motifs are common, often mirroring human characteristics. Again, the owl is a recurrent theme in the posters. Piatti designed over five hundred advertising posters, often on humanitarian and socio-political topics. Particularly well-known are the series of posters for the Mustermesse and for the Comptoir suisse.

Piatti was awarded a major assignment in 1961 with the appointment as graphic designer for the newly-established Deutscher Taschenbuchverlag dtv. For thirty years, he was in-house graphic designer at dtv and was responsible for cover designs. Piatti created over 6,000 covers during his time there, always featuring black lettering, a white background  and the typical artistic, functional and clearly-structured illustrations to arouse readers‘ interest. In his interview with the Schweizer Illustrierte, Piatti explained that his idea was to use white as a base tone to give his illustrations a timeless quality.

Piatti created a diverse body of work, ranging from posters, books, art prints and stamps to illustrations for the satirical magazine Nebelspalter. The NL’s Prints and Drawings Department holds around eighty of Piatti’s posters, while the Helvetica collection contains books illustrated by Piatti and books about the artist and his work. A search in the HelveticAll catalogue allows us to explore Piatti’s oeuvre. The artist, for whom the owl was a lifelong companion, died in December 2007.