In Daniel Spoerri’s library of recipe folders, offal is presented artistically as a central element in the transformation of food. 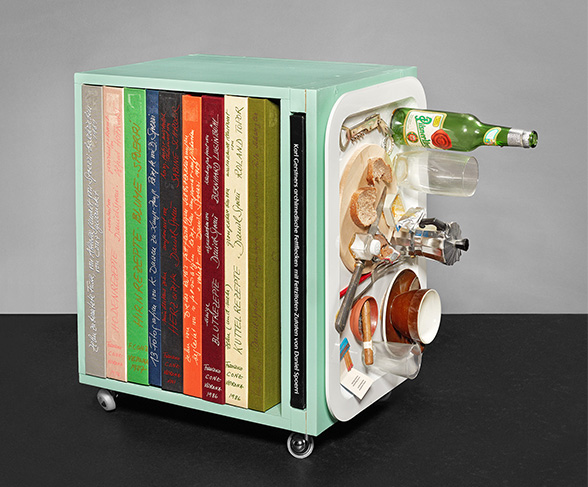 The ten recipe folders are stored in a coloured box on rollers, with a “Tableau-piège” by Daniel Spoerri fixed to its right side.

A fascination with meat and offal has been an enduring feature of Daniel Spoerri’s culinary explorations since the early 1960s. Back then, he purchased his first bull’s testicles in a triperie in Paris, assuming they were “white kidneys”. Later, in Greece, he encountered a soup made from the offal of Easter lamb called magiritsa, which is eaten after the strict fast, while in Brittany he discovered the custom of consuming blood sausage at Christmas. In his pseudo-scientific “A dissertation on Keftedes” (written between December 1966 and January 1967 on the Greek island of Symi) he expatiates in literary fashion on how left-over meat is rendered more palatable by turning it into meatballs. 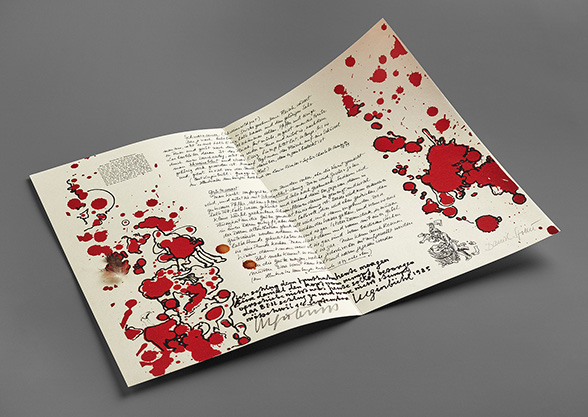 An example from the collection of blood recipes

The “Rezeptmappen-Bibliothek” (Library of recipe books), published between 1984 and 1990 by Francesco Conz in Verona, presents various ways of preparing offal through a variety of text and image combinations. Spoerri collected and edited the recipes, while his artist friends Fritz Schwegler, Roland Topor, Bernhard Luginbühl, Katharina Duwen, Alfred Hofkunst, Bernhard Johannes Blume, Sabine Schroer, Christian L. Attersee, Dieter Roth and Karl Gerstner provided the illustrations. Yet this is not a conventional series of cookery books organised according to familiar criteria such as starters, main courses and desserts. Instead, the recipes are arranged by organs and body parts, because Spoerri’s intent was to serve up animals as complete entities, with all their organs. The first volume, in which he set down his favourite soup recipes, was thus followed by recipes for tripe, blood, lungs, tongues, testicles, brains, feet and fat.

Daniel Spoerri is himself an enthusiastic collector of cookery books. However, he is interested not just in methods of preparation but also, and in particular, in developments within cultural history: with the fact that eating an entire animal can have a special socio-cultural significance. Offal, for example, frequently plays a key role in rituals and ceremonies. In many cultures, eating brains is believed to strengthen the mind and body, while testicles are supposed to possess aphrodisiac qualities. Within European culture, meanwhile, certain body parts had by the early 20th century been dismissed as inedible, often for hygiene reasons. As animals come to be regarded more highly, the trend is shifting once again, towards eating the whole beast: from nose to tail. 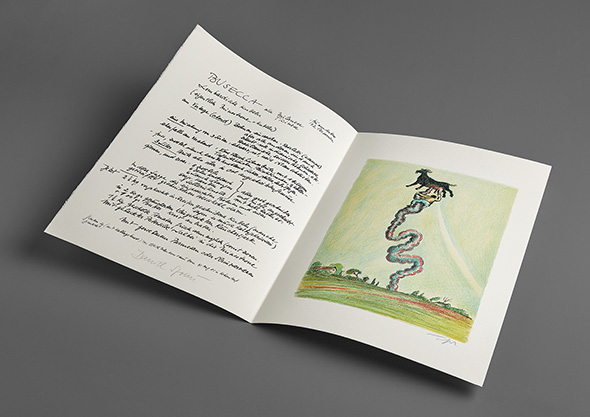 The tripe recipes are illustrated with representations of intestines

For Spoerri, to study food is to study life, since eating is a fundamental human need, given that “our two most important drives are, after all, self-preservation and procreation, […].” When offal is made into food, with stomachs and intestines being processed into tripe and sausages, the very organs that are used to digest food are themselves consumed. This cycle is also addressed in the film “Resurrection” (1969, conceived by Daniel Spoerri and shot by Tony Morgan), in which it is shown in reverse. The film begins with an image of human excrement, the end product of digestion, and then moves backwards into the intestines, then to the steak on the plate, the piece of raw meat in the butcher’s shop, and finally the reborn cow in a field.

In the end, even the prime cut of meat is digested in the same way as tripe, which is itself part of the digestive tract. In his library of recipe folders, Daniel Spoerri focuses his attention on offal, which is regarded by many consumers as inferior to “pure” muscle meat, and invites us to reflect on meat’s true value.

Daniel Spoerri (b. 27.03.1930 in Galați, Romania) lives in Vienna. After studying dance in Paris (1952) and working for a time at the Stadttheater in Bern (1954–1957), he became a choreographer and director. In 1960 he was one of the founders of “nouveau réalisme”. He came to prominence as a visual artist mainly through his “Tableaux-pièges” (snare pictures).

Using every part of an animal is a modern trend; but in fact it dates back to traditional practices of efficient resource management and the enjoyment of good food.

Daniel Spoerri archive in the NL