In search of the first snow cannons and their impact

As “Switzerland’s memory”, the NL also collects, catalogues and provides access to Swiss newspapers. You can therefore research snow cannons in the archive and get a sense of the initial excitement in early media reports. Meanwhile, why not visit the NL’s current exhibition that traces the history of snow?

“[…] It’s not that long ago that people first discovered the wonder of winter resorts and told of an untouched realm of wonder and beauty. […] And today? How different things are. What was once the privilege of a select few has become common property. Throngs of people now strap on their skis to seek thrills and the wonders of winter at every possible opportunity!” (Roelli, in: Es leuchtet der Schnee/Ein Werk von der Schönheit des Winters in Bild und Wort. 1934, p.63.)

Today, snow-covered ski runs are part of Switzerland’s Alpine identity. But snow is dictated by meteorological conditions, over which we humans have no control. If natural snow does not fall or keeps us waiting, winter tourism grinds to a halt.

But yearning for snow is a thing of the past because technology has found a way to resolve the shortage. Since the 1960s, it has been possible to produce snow artificially using so-called snow cannons to recreate the wonder of winter at the touch of a button.

A declaration of war on the weather gods 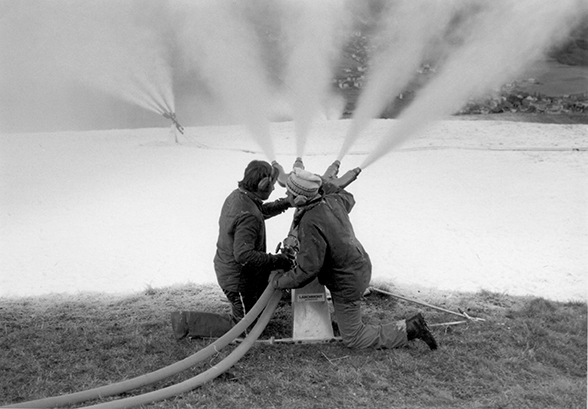 Artificial snow has sparked plenty of reaction in the media, from initial excitement to controversy, as shown by research in e-newspaperarchives.ch, the platform for digitalised Swiss newspapers. On 12 December 1962, the newspaper Der Bund reported on the ski resort Chalet-à-Goblet, where artificial snow had already been used for some time. It explained that the best powder could be spread by cannons in spots with insufficient snow cover. “A declaration of war on the weather gods” was the headline in the same newspaper on 4 January 1971 after snow was “conjured up” from snow cannons for Grindelwald’s slalom slope. On 20 February 1971, the Walliser Bote reported on the test of the cannon dubbed “Big Bertha” at the ski resort in Saas Fee: “The snow cannon is able to cover no fewer than 500 square metres with a five-centimetre-thick layer of snow in an hour.” Meanwhile, on 24 December 1973, the Walliser Bote reported from Flaine (France) on the “latest attraction in winter tourism”: a 2.5 km long downhill piste that guaranteed at least 200 days a year of perfect snow conditions thanks to ten snow cannons. The project was financed by multimillionaire Eric Boissonnas. And in Savognin, the snowmakers at Europe’s first large-scale snowmaking system guaranteed snow that was “reliable, granular and with maximum grip” according to the Walliser Bote on 7 January 1981.

Snow cannons – another substitute for nature?

But gradually the euphoria of being able to produce snow on demand gave way to opposition, with people questioning the financial and environmental aspects. Pro Surlej, an association for landscape conservation in Oberengadin, published an article in the Engadiner Post on 10 December 1985 entitled ‘Snow cannons – another substitute for nature?’ In it, Pro Surlej called for binding regulations for the use of snow cannons, one of its arguments being that too little was known about the effect of artificial snow on the natural environment. In the 1990s, critics of snow cannons became ever more prominent in the newspaper archives.

For the current exhibition “Snow. The wonder in white”, curator Hannes Mangold has researched the history of snow cannons and tells us what has become of the initial euphoria:

“Advancing global warming means artificial alternatives to natural snow are becoming ever more important. And the same can be said of snow farming projects. The Winter Olympics in Beijing this year were the first ever to use 100% artificial snow. And as can be seen in the media, this sparked plenty of controversy, because people are now well aware of the artificial snow dilemma – the large amounts of energy and water required for artificial snow cannons are difficult to reconcile with achievement of the climate targets, yet without them Alpine winter tourism would barely be viable. What is now common knowledge is what environmental associations have been warning about for decades. At the NL you can research these topics in association journals, academic theses and archived websites as well as in newspapers.”

Tips for research in newspapers and periodicals