In search of Father or Mother Christmas

The festive period makes us want to pick up a pen again – whether to write a letter to Father Christmas, or to send someone a greetings card. As “Switzerland's memory”, the NL collects, catalogues, preserves and provides access to poems and other texts that are sure to inspire you this Christmas.

In the run-up to Christmas, we receive various requests from users concerning publications on the theme of Christmas. It is an opportunity for the NL's research service to rediscover its analogue card index containing titles and first lines of poems and songs. This index, which was created between 1977 and 1989, provides the text references (in Swiss German only) contained in 676 books and periodicals from the 20th century.

If you've got the first line of a poem stuck in your head but you've forgotten the title, you might find what you're looking for at the NL. The recent example of a user who could only vaguely remember the words of a song she had learned in the 1960s illustrates the diversity of requests received by the NL and the many and varied resources the service offers.

Letters to Father Christmas…and others

At this time of year, children also pick up their pens and get writing and drawing their letters to Santa. The number of letters received by the Swiss Post has grown steadily: from around 450 in the 1950s to almost 36,000 in 2021, 60% of which came from French-speaking Switzerland. The letters are subsequently preserved by the Museum of Communication in Bern. A compilation of the most magical missives was published by Applaus Verlag in Zurich in 2014 under the title “Lettres au Père Noël” / “Briefe ans Christkind” and can be consulted at the NL. 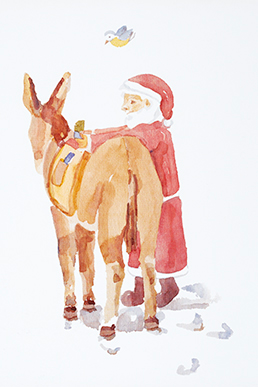 It is interesting to note that children favour drawings over words in their letters, but also that they don't all address them to the same bringer of gifts. Although there are no statistics on the topic, it seems that the Christkind (“the Christ Child”) is more common in German-speaking Switzerland, while Father Christmas is favoured by the French- and Italian-speaking cantons. Moreover, the exchange of gifts at Christmas as we know it today only emerged in the late 19th century in Switzerland. Before that, children mainly received small presents on Saint Nicholas Day (6 December) in the Catholic regions, at New Year in the Protestant regions, and at Epiphany (6 January) in Ticino. As the Reformation rejected the veneration of saints, from the 16th century Saint Nicholas was replaced with the Holy Christ, which over the years evolved to become the Baby Jesus, represented by a young girl or an angel dressed in white, who brought presents at Christmas. In Valais it was known as the Poupon Jésus.

Other figures, such as the Mutti or Neujahrmutti, the Pelzer and the Neujahrskind also handed out presents in the region around Bern. In French-speaking Switzerland, the Baby Jesus replaced a host of traditional characters. In the canton of Vaud it was the Bon-Enfant, an old man with a white beard who gave out presents in the form of sweets, initially at New Year and later at Christmas. He was sometimes accompanied by what was thought to be his wife – known as Chauchevieille – who would prepare the sack of presents and the cane for the naughty children. In Geneva, it was initially a spirit called Chalande (patois name for Christmas) who would come down the chimney the night before Christmas bringing annailles (walnuts and hazelnuts). When he evolved to become Père Chalande, he took on the appearance of the Bon-Enfant from the canton of Vaud. Meanwhile, in the canton of Jura, Mother Christmases brought presents. In Ajoie, Tante Arie would come to visit families on Christmas Eve, accompanied by her donkey. In Bernese Jura and Neuchâtel, la Dame de Noël, dressed in a white bridal gown, hid her face under a veil and rung a bell to announce her arrival on Christmas Eve or Christmas Day. In the Tavannes Valley, she was accompanied by Saint Nicholas and would give children presents after listening to them recite songs and poems, and promise to be good and eat their soup!

Whoever you're writing to and however you're celebrating the festive period, you'll find Christmas stories, poems and songs at the NL which are sure to inspire you.

Christmas in the general catalogue HelveticAll