Zurich’s slaughterhouses and the changing face of meat production

The city of Zurich is an interesting case study in the “life and death” of modern slaughterhouses within a socio-historical context. Practical constraints, social conditions and the current state of knowledge dictate where a slaughterhouse is built and how the practice of animal slaughter changes over time. 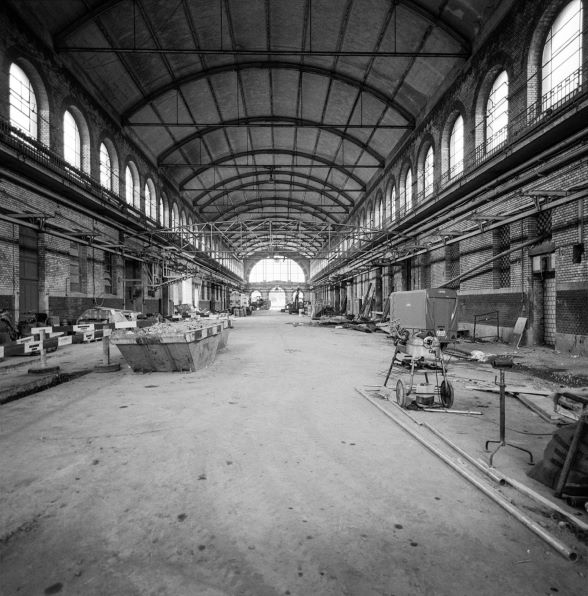 Conversion of the Zurich slaughterhouse, photograph by Marcel Vogt dated 18.8.1986

The history of meat production and slaughterhouses in some ways parallels the history of humanity: from nomadic hunters satisfying their day-to-day needs from the spoils of the hunt, via settled pile-dwellers slaughtering domesticated animals, to increasing specialisation with the advance of civilisation, leading to a palpable sense of distance between human beings and their “prey”.

In a modern slaughterhouse, international standards govern the various stages in the process. It brings to mind the slaughterhouse scene from “Tintin in America”, with live cows being fed into the processing machine at one end and emerging as tins of corned beef at the other.

A butcher’s by the town hall

Until medieval times, slaughtering animals was a task for farmers and itinerant slaughtermen. Slaughtering took place once or twice a year, in the fields, in the farmyard or in the washhouse.

By the late Middle Ages, butchers were moving their businesses into the towns and cities. In Zurich, for example, the butchers’ guild helped to foil an attempted counter-coup attempt by the city’s former rulers and was granted certain privileges, enabling it to position itself better in day-to-day commercial life. In 1420 the city council permitted the establishment of a city butchery, comprising a slaughterhouse with a covered meat market. In its heyday, there were 33 meat counters on what is now the “Gemüsebrücke” bridge, directly adjacent to the town hall at a prime location in the heart of Zurich and right by the River Limmat. Water was essential to the business of slaughter, being used for tasks including cleaning the innards and scrubbing surfaces. By 1863, the citizens of Zurich were finding the emissions from the centrally located butcher’s by the town hall increasingly intolerable. In 1866, a new slaughterhouse was built and opened on the outskirts of the city at the Walche, also by the river and opposite the railway station; it featured a symmetrical ground plan in the French style. From now on, it was made compulsory for all animal slaughter to take place in an abattoir. The slaughterhouse at Gemüsebrücke was demolished and replaced with a covered meat market.

Until 1906, slaughtering took place at the city’s Walche slaughterhouse. There, the beginnings of an industrial division of labour began to emerge. The animals were separated by species prior to slaughter, with the various steps such as evisceration, boiling the innards and scalding being carried out in clearly demarcated areas. Specialists, such as flayers responsible for skinning the animals, were employed.

In 1893, eleven suburbs merged with the city of Zurich, as a result of which these formerly independent communes were likewise compelled to use a slaughterhouse. This process of centralisation encouraged the codification of food legislation. By this time, access to a railway line was more important than proximity to water when it came to choosing the location for an abattoir. The Letzi district had just such a rail link. The city purchased the site outside the centre in order to build a modern slaughterhouse. It was constructed on the model of German slaughterhouses which were designed to allow for efficient workflows.

The Zurich slaughterhouse opened in 1909. Thereafter it had a chequered history marked by crises, wars, scandals, competition from wholesalers and imports of foreign meat, the changing eating habits of consumers, and the takeover of slaughtering operations from other cantons. The last rail tracks on the grounds of the Zurich slaughterhouse were removed in 1981, by which time the site had lost its principal raison d’être. In 1985, the large slaughterhouse hall on the Letzi site was decommissioned, and a new, partially mechanised slaughterhouse was opened next door. Now a listed building, the converted hall has since been used as a butcher’s, a restaurant, a car showroom and for other commercial enterprises, as well as residential accommodation. The City of Zurich plans to present a new strategy for its use by the middle of 2021. In all, 50,000 m² of former slaughterhouse premises face an uncertain future.