Rationing and making do

The ‘make-do’ mentality can also be applied to what we eat. During the Second World War, the Swiss had to adapt their diets and find substitutes for foods that were in short supply, such as meat, based on what was available. How did people manage?

From 1938, surrounded by warring nations, Switzerland was quickly forced to secure  national economic supply. Having been caught out due to a lack of preparation in the previous conflict, the government got ready to manage another crisis. Besides rationing (allocation of food using food supply stamps), other measures were introduced.  In the field of agriculture in particular, the Wahlen Plan – the expansion of the crop cultivation area throughout the country – was implemented to ensure greater food self-sufficiency. 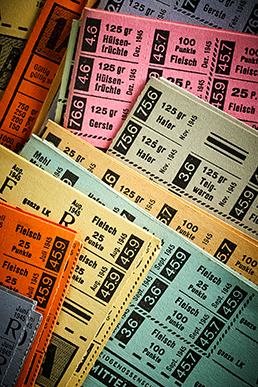 Continued trade despite everything

During the ‘phoney war’ Switzerland continued to trade with other countries, albeit with more difficulty. The defeat of France quickly changed import capacity. Nevertheless, the agreements negotiated with the Allies and with the Reich ensured continued supply to Switzerland, but not without sacrifices. On the Italian side, Switzerland had access to the port of Genoa until the fall of Mussolini in 1943, allowing it to buy goods from overseas.

The rationing system was deployed throughout Switzerland and was adapted according to what food was available. When it was introduced, rations purported to be equal for every inhabitant, regardless of their spending power. However, from 1942 rations were differentiated according to whether an individual did manual work. This system was accompanied by price monitoring in order to prevent excessive profits and limit price increases.

The rule of two meat-free days a week from May 1942 came just before the rationing of meat products in November of the same year. Before the start of the hostilities, meat production in Switzerland had been sufficient to meet domestic demand. But due to the strong dependence on animal feed from abroad, which was becoming increasingly difficult to import, and the expansion of crop cultivation areas, meat production declined.

Yes to substitution, but how?

From a nutritional perspective, meat provides protein, vitamins and trace elements that are more or less difficult to replace. Instead of completely substituting meat with one or more other ingredients, people tended to use less meat in their cooking, without sacrificing the flavour and quality of the dish.

This is evident in wartime cookery books, which allowed households to cope with the restrictions without having to switch to a strict vegetarian diet. Although the books recommend substituting meat with pulses, cheese or wholemeal bread, there are also recipes for breaded mortadella slices, liver (fried or as croquettes), slow-cooked chicken (because cooking on a low heat with liquid is perfectly suited to all chickens – whether young or old), cabbage stuffed with minced meat, rabbit stew….What sets all these recipes apart is their thrifty use of meat and the fact that they can be adapted to available rations. As well as the potato – a veritable staple that featured almost every day on Swiss plates – the books also extoll the virtues of soup, which became a permanent fixture at dinner and supper. It should be noted that not all food was continuously rationed. Apart from potatoes, fruit and vegetables were never put on ration.

The end of hostilities in Europe in May 1945 brought a slow return to normality, with rationing being gradually phased out by1948.