From substitutes for men to activists: Swiss women and the Great War

The First World War drastically changed Switzerland, both in terms of its supply and  the management of its workforce. Through their involvement during the conflict, women played a key part in the functioning of the country, paving the way for female emancipation and for women to play a greater role in the economy.

The general mobilisation of 1914 saw a shake-up of roles across various sectors. In the absence of their husbands and sons, women had no choice but to replace men where they were most needed. This influx of women into the workplace was all the more vital given that conscripts’ pay and rare allowances were not enough for a household to live on.

A trend that was not entirely new

The presence of women in this fraught economic context varied by sector: while a farmer sent to the front could rely on his wife or parents to look after the farm in his absence, things were different for salaried workers. In the manufacturing sector, particularly the watchmaking industry, women already made up an integral part of factories, accounting for around a third of staff between the beginning of the century and 1910. This figure rose to nearly 40% during the interwar years. 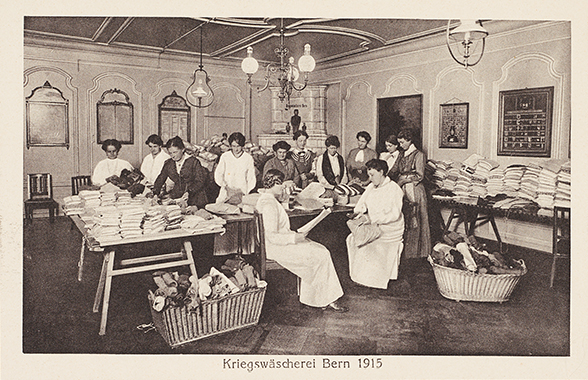 Two exhibitions on women’s work (known as SAFFAs, which is the German acronym) were organised in Bern in 1928 and Zurich in 1958 by feminist associations. The first highlighted the difficult working conditions for women in Switzerland in the post-war years, while presenting the advantages of women’s work to the economy. The exhibition also strongly supported emancipation in terms of the right to vote. The second exhibition focused on the opportunities for women to have a job, to get an education and on consumption in general. In addition, the contributions of women were presented as essential to the functioning of the country.

Margarethe Hardegger, Dora Staudinger and Else Züblin-Spiller each worked in their own way towards the recognition of women’s rights during this period.

Margarethe Hardegger fought for women’s rights her whole life. She founded her first union in 1904 and two years later became the first secretary of the Swiss Trade Union Federation (USS). She fought against social inequality and labour exploitation, which mainly affected working class women. As a champion of sexual freedom, the right to contraception, and abortion, her ideas were far from conventional for the time. A pacifist, she advocated the abolition of the armed forces. She also instigated the creation of agricultural communities and was committed to the fight for women’s suffrage.

Else Züblin-Spiller started off as a political journalist, before getting involved in the fight against poverty. In 1914, when the First World War broke out, she founded the Swiss Association for Soldiers’ Welfare which  provided affordable, balanced meals without alcohol in ad hoc venues. Based on the same model, she established canteens in factories. In 1916, she set up the soldiers’ aid service. She was also involved in the women’s movement, encouraging women to work and take part in the SAFFA exhibition.

Dora Staudinger was a German activist who settled in Zurich in 1912. She was one of the few women in Switzerland to have played an important part in the housing reform movement, in particular through the “Allgemeine Baugenossenschaft Zürich” (ABZ) cooperative, founded in 1916. In 1913, she founded the first women’s cooperative in the “Lebensmittelverein Zürich” (Zurich consumer cooperative). She became a member of the socialist party in 1914, and with Clara Ragaz set up the Swiss arm of the Women’s International League for Peace and Freedom in 1915. She also championed the needs of housewives.