What does the future hold?

Predicting the future has long been a popular pastime at the start of a new year. Despite condemnation of demonic “witchcraft” by Church and State, women in Switzerland still worked as “fortune tellers”. Criminal case files offer an insight into the motives of the “offenders” and those who prosecuted them.

“What does the future hold?” That existential question is especially prominent in people’s minds at the start of a new year. The methods used to answer it are many and varied. A modest typology might list at least four: planning, forecasting, divination and prophecy.

Planning involves extending familiar patterns of behaviour and intentions into the future, in an attempt to bend the course of time to our will. But a situation such as a pandemic offers a timely reminder that things often don’t turn out as we plan. 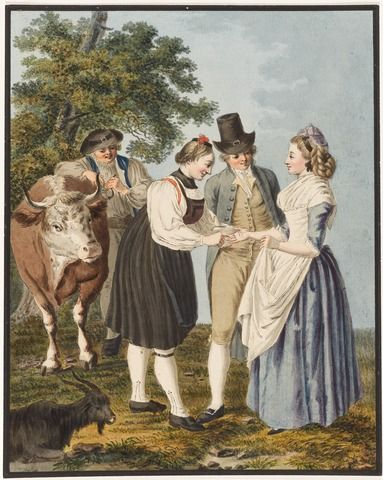 When we make a forecast, we extrapolate from past experience to predict future developments. This method, which is based on laws and probabilities, is used in insurance, weather and climate forecasting, predictions for share prices and the like.

Divination has been used since Antiquity to interpret natural phenomena such as the flight of birds, the entrails of sacrificed animals, tarot cards and the appearance of comets. The diviner enters a meditative state, engaging with their surroundings in order to glean clues to the future.

Unlike divination, prophecy assumes the existence of an unearthly, spiritual source. A prophet receives and proclaims messages or oracles from a deity, spirit or dream.

In order to “work”, all these approaches require an audience that regards them as plausible. From a cultural history perspective, it can be seen that more than one approach can coexist and hybrid forms can also occur. In modern societies, where the influence of science is strong, the first two methods of prediction are widely accepted. But the shift from the magic wand or bishop’s staff to the critical yardstick has entailed a lengthy process of enlightenment which is not yet complete.

With the publication of Heinrich Kramer’s “Malleus Maleficarum” (Hammer of the Witches) in 1486, the arbitrary persecution of “fortune tellers” and other unpopular figures in Europe assumed new dimensions. Notable victims of the inflammatory treatise were the successors of Cassandra and Sybil, as can be seen from the fate of women in Switzerland who predicted the future. In the court files they are often described as “female fortune tellers”.

An inquisition manual dated 25 November 1635 states that fortune telling can be practised without any formal allegiance to the “evil enemy”. Thanks to this favourable assumption, mere fortune tellers got off fairly lightly, with no more than the loss of their right of domicile.

In 1531 a fortune teller in Lostorf (Solothurn) was locked up for being a witch. The council resolved to release her, provided she was not an demon. She was to be banished from the bailiwick under oath. Presumably she was not punished in any other way, since no more was heard of her.

May 1643: Maria Magdalena Weltzin, a sheriff’s daughter from Meyenen, silk embroiderer and fortune teller, stood accused of practising sorcery at the inn in Neuendorf (Solothurn). She was banished under oath from the town and land.

On 31 August 1801, pastor Raillard launched an investigation into a fortune teller near St. Alban whom he accused of fortune telling for money using a deck of cards, attracting large numbers of customers. This, he claimed, was undermining the moral order, and he called for an inquiry to be put in hand.

In 1814, an investigation took place in Basel into the cartomancer Maria Magdalena Meyer, aged 40, divorced, with an illegitimate child, from Oberstrass, canton of Zurich, who was accused of “egg reading”.

The court judgment (Riehen 1838) against Salomea Ehrler for cartomancy, in a case brought by the local constable, was “not guilty”. Nevertheless, Ehrler was banished from cantonal territory.

The cartomancer Marianne Katharina Lang found herself up before the court accused of being in Basel unlawfully and persuading eight young girls to part with 30 cents each for a card reading at the most recent fair (city market).

Karl Christian Ischer, a Latin teacher at a school in Thun, lamented in the “Zirkularbuch” (1823–1826) that even people from “good” homes would sometimes visit fortune tellers.

In the same paper, Vikar Kramer in Thierachern told of a woman who, on her deathbed, stated that she had believed a fortune teller’s prophesy that her husband would die before her and she would remarry. She had the last rites read almost “too late”.

A teacher named Greter from Rothenburg, Lucerne observed in 1949 that too many people still believed in cartomancy and fortune telling: “When someone claiming to be a fortune teller turns up at a fair, we see many from our community handing over their hard-earned cash for this fraud.”

Anyone hoping for golden fruits, gentle breezes and smooth pathways in the new year can receive them in fully automated form from “Le grand magicien”. This android created by the Swiss Jean-David and Julien-Auguste Maillardet, a masterpiece of 18th-century precision engineering, is on display at the Musée international d’horlogerie in La Chaux-de-Fonds.