The road to women’s suffrage: delving into the press archive

Women in Switzerland got the vote 50 years ago. Behind that achievement lay years of struggle to gain a hearing, exert influence and shape opinion. How did women make their voices heard in the past? The Swiss National Library takes a look through contemporary documents and investigates the mood of the time.

The date is 7 February 1971: 65.7% of Swiss men cast their ballots in favour of votes for women at the federal level. A right that is now taken for granted had to be fought for long and hard.

How did women organise their long struggle before 1971 and gain attention for their cause? Much important work was done within associations, whose newsletters served to disseminate ideas and concerns. Meanwhile, a press with a growing audience took up the controversial issue. Today, historical articles, readers’ letters and advertisements allow us to relive the mood and thinking of the time. Here, we present some of the interesting items we’ve found. 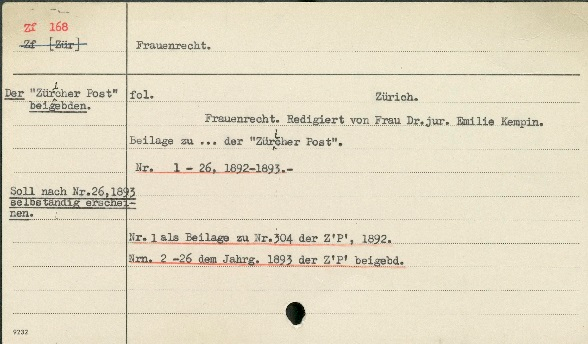 NL catalogue card containing metadata on the publication “Frauenrecht” for the years 1892 to 1893, edited by Emilie Kempin-Spyri

In the supplement to the “Züricher Post” dated 1 January 1887, the historian Meta von Salis published what she called “a woman’s heretical New Year thoughts” (in German: «Ketzerische Neujahrsgedanken einer Frau»). She writes: “Of the many questions that equality between men and women raises, I have hesitated longest to favour those concerning their civil rights – there is no lack of willingness to concede them their obligations. I therefore approve them even more, without reserve and in all respects. It is women’s entitlement both to vote and to stand for election.”

In 1928 the magazine “Le mouvement féministe” looked back at the Swiss exhibition of women’s work (SAFFA) and, in its 26 October issue, asked whether the event had advanced the cause of women’s suffrage: “Les opinions sont différentes à cet égard” ("Opinions are divided on the subject"), was the verdict of editor-in-chief Emilie Gourd.

On 12 March 1937, the Bernese Women’s League’s “Berna” reported on the conference of the International Alliance of Women, and referred to Emilie Gourd’s optimistic speech on a legislative initiative to give women the vote in the canton of Geneva: “In every other country, parliament, even a dictator, accords women the right to vote, while here a majority of male citizens has to be convinced of its merit: what an effort, but also, what a victory!”

Unterbäch and the female suffragists

In 1957, ahead of the national vote on suffrage scheduled for 1959, the press reported that the commune of Unterbäch in Valais had granted women a vote on a specific initiative. The “Walliser Bote” newspaper of 8 February wondered if we were viewing a “women’s suffrage operetta”, and advised the “female suffragists” to be patient.

When the first vote on granting electoral rights to women at the federal level was held, “La Liberté” reported on 2 February 1959: “Thus the male population decided by a majority of two to one that it alone would constitute the electorate, and that the opinion of women who make up the majority of adults in the nation would not count.”

Following the men’s “no” vote in 1959, the situation changed slowly. 1 March 1969 saw a meeting of the women’s associations in Bern. A protest march also took place: “The (officially approved) demonstration forming part of the ‘march on Bern’ paled visibly in comparison with the impressive and dignified rally of the Swiss women’s associations”, opined “Der Bund” on 3 March 1969, illustrating its article with a picture of the sit-in by “young demonstrators”.

On 7 February 1971, Swiss electors finally voted “yes”; though some cantons, such as Thurgau, still came out against. The “Bote vom Untersee und Rhein” of 9 February attributed the result to the high turnout. It emphasised that rights also entailed obligations. From now on, women would be required to form judgements: “As responsible and genuinely fully-fledged electors, they are most welcome!”Once again, then, the issue of obligations raises its head, bringing us back to Meta von Salis’s New Year thoughts from 1887.