The NL was founded 125 years ago. What was Switzerland like back then? What were the issues on people’s minds? What were the prevailing trends? Our topic for June is the deep divides between the social classes and the explosive atmosphere among the labour force in around 1895. 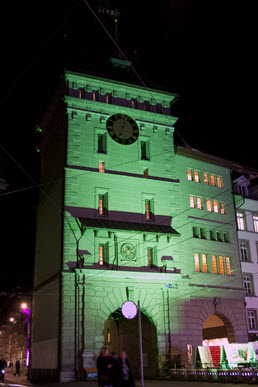 The west façade of the Käfigturm bathed in green light, taken on 17 March 2018 during Museum Night (Wikimedia Commons)

The foundation of the Swiss National Library in 1895 came at a time of rapid growth and accelerated urbanisation in Switzerland: the population of the country’s towns and cities grew at least sixfold between 1850 and 1910. This development was characterised by phases of economic boom and crisis. A new social structure took shape that was essentially divided into three classes – bourgeoisie, peasants and workers – with very little in common. The resulting economic, political and ideological divergences led to tensions that manifested themselves in strikes and social unrest such as the Käfigturm riots of 19 June 1893 in Bern, an event of historical significance.

On 17 June, an anonymous advertisement appeared in the “Stadtanzeiger” newspaper announcing a “gathering of stonemasons and handymen” on Monday 19 June. On that muggy summer day, a group assembled that moved on to the Kirchenfeld district, where fighting broke out with Italian building labourers. The latter were accused of depressing wages by working for 24 to 26 cents an hour rather than the then customary 28 to 32.

The police, who had been monitoring the goings-on, made arrests and took the detainees to the Käfigturm. There, street battles ensued between workers trying to free the prisoners, and the police, backed by the fire brigade and armed militiamen. The rioting died down after the city’s mayor decided on his own initiative to call in troops, who arrived from Thun at around midnight.

Both the policemen deployed against the workers and the soldiers were from the countryside. They had nothing in common with the proletariat save for poverty. The principal cause of the explosive atmosphere that sparked the Käfigturm riots was the precarious living situation in the overcrowded workers’ districts. However, another typical feature in times of social destabilisation is the recourse to concepts of the nation and patriotism in an effort to establish a new consensus. Xenophobia manifests itself as a negative form of this phenomenon: hatred of Russians among the bourgeoisie (workers’ secretary Wassilieff was Russian-born) and of Italians among the workers.

In all, 30 policemen and 30 workers were injured in the night’s fighting. Emerging “victorious” from the unrest was the bourgeoisie, whose members held a raucous party that same night of 19 June to raise funds for the Bubenberg memorial. Initially, the political impact of the riot also worked in the bourgeoisie’s favour: in the May 1894 elections to the Grand Council, the city’s social democrats suffered losses, with two prominent members failing to secure re-election. Just a few months later, however, in October that year, Bern’s trade unions took a few short hours to collect the necessary signatures for a proportional representation initiative in the city, which was subsequently accepted.

Thereafter, workers’ representation in the city’s parliament and government grew rapidly. In the decades that followed, this trend was repeated at cantonal and federal level.

In its Dispatch of 8 March 1893 “concerning the foundation of a Swiss National Library”, the Federal Council explicitly mentions by name only one political force, namely the “social democratic movement”. This reflects the concern among the (progressive) patriots of the day to secure the broadest possible political support for their project – including among the workers, who at the time were barely integrated into Switzerland’s political system.