Meat often features heavily on the menus of our winter feasts. But why are we so carnivorous at Christmas and New Year? Where does the tradition come from?

What could be more convivial than good wine, good company, delicious confectionery and, in most cases, meat – lots of it: juicy ham, roast pork, turkey and “fondue chinoise”? We’ve helped ourselves to generous portions of everything, but once the Christmas decorations have been cleared away and the scent of cinnamon has faded from the living room, we glance down a little shamefacedly at the extra bulge around the waist.

Festive flab is the physiological outcome of overindulgence. But why, when it comes to festive meals, do we throw caution to the winds and, in particular, consume so much meat? 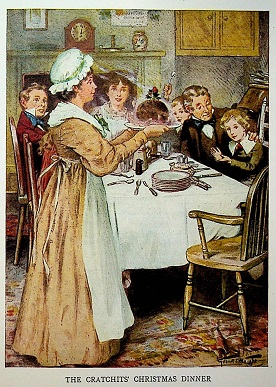 The lavish, meat-heavy dinners we tend to consume around Christmas time go back a long way. Right up until the 19th century, rural populations mostly produced their own food. Since there was not enough feed to keep animals alive through the colder months, they would frequently be slaughtered at the start of winter, most often in early November. This seasonal event was accompanied by a sumptuous feast known in Swiss German as “Metzgete”. People from every corner of the village would come together to help process the slaughtered animals. Nothing went to waste: blood was turned into sausages, and even the pig’s bladder was kept as a toy for the children.

During the Nativity Fast, which lasted from mid-November to Christmas Eve, a pig was often kept to one side and fattened up. The animal was then butchered shortly before Christmas and consumed as a celebratory meal once the fast was over. Fortunate, then, was the farmer who was able to “go the whole hog” and roast a pig for Christmas. The practice of seasonal slaughter thus led to a surplus of highly perishable meat which had to be used up rapidly and so was often shared out among the community. Another custom associated with Christmas since the Middle Ages was almsgiving. This tradition soon became linked to the abundance of meat, leading to extensive Christmas spreads involving large quantities of meat that poorer households were often also able to share in.

Criticism of meat-eating and excessive consumption

The emergence of vegetarianism in the wake of the early 20th-century “Lebensreform” back-to-nature movement gave rise to the first, tentative criticisms of extravagant meat-eating at Christmas. An author writing for the Berner Woche magazine of 21 December 1935 lamented the tragic fate that befalls thousands of geese every year in the run-up to Christmas.

In the 1970s and 1980s, there were more widespread complaints that Christmas had become entirely commercialised and an excuse for unbridled consumption. Those of a more conservative mindset bridled at the criticism, and argued that Christmas should continue to be celebrated in the time-honoured fashion.

And what of today?

How would our meat-eating ancestors view the way we mark feast days now? They would probably be bemused by our perennial agonising over weight gained during the festive season. In all likelihood, they would also be astonished at the vast array of cuisines on offer over Christmas these days, which increasingly includes meat-free – though equally festive – alternatives.