Pioneer of animal-free agriculture and organic farming, Mina Hofstetter-Lehner was interested in issues relating to food production and diet, but also championed causes such as emancipation and economic reform.

“I was not even three years old when I was given meat broth to eat for Sunday lunch – probably for the first time in my life. I tasted it, put my spoon down, and refused to eat any more. My father tried to force me but didn’t manage, and that’s when I got my first ever beating. I can still feel it today. If I hadn’t been afraid of more beatings, I would probably never have eaten meat.” 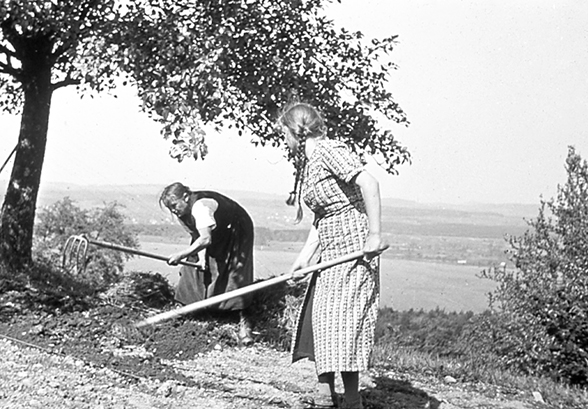 Mina Hofstetter (left) at work with her daughter; photo taken in the 1930s

These are the words of vegetarian and animal-free agriculture pioneer Mina Hofstetter-Lehner (1883-1967) as she recalls a formative experience from her childhood. Two stances that would shape her later life can be traced back to this: an aversion to eating meat and to basic power structures. This experience gave rise to three specific questions that would preoccupy her throughout her life: Why are we sick? Why do most people have to work their whole lives but remain poor? Why is there something ineffable between men and women that is tainted?

Hofstetter loved living in the countryside and was happiest when working in the fields. However, she had a terrible fear of cows and hated the smell of the stalls so much that she refused to marry a farmer because she said they smelled of them, too. She loved sowing and was devoted to ensuring her plants thrived. In her parents’ garden, only her grandmother had allowed her to sow. But after she acquired her own farm (“Stuhlen”) on the shores of Lake Greifen, she pursued alternative, complex, but animal-free farming methods and published her findings.

Vegetarianism, the outdoors and emancipation

Hofstetter was always a slightly sickly woman, but switching to a raw vegetarian diet significantly improved her health and wellbeing. During the 1920s, she broadened her interest in the Lebensreform movement through reading and personal connections. In particular, she developed a close friendship with the vegetarian, teetotaller and free money theorist, Werner Zimmermann. In his 1922 paper “The liberation of women”, Zimmermann advocated women’s suffrage and a “wage for mothers” that would be financed by allocating ground rents to the public good. He believed that women should no longer have to depend on their husbands and have to “constantly beg and plead for housekeeping money”. Rather, he argued, “all workers should be entitled to the full proceeds of labour – including housewives.”    Hofstetter was a grateful proponent of this idea since she too had had to negotiate with her husband “field by field” because initially he did not believe in her cultivation methods. However, they soon agreed on a distribution of labour on the farm, where he ran a carpentry workshop in a barn with one of their sons, while she, their other son, and their visitors ran the farm.

Hofstetter relished this freedom. She used the farm for practical courses and talks to impart her cultivation methods. Her guests also included high-profile figures from the Lebensreform and women’s rights movements. Maximillian Bircher-Benner, engineer Konrad von Meyenburg,  Viennese writer Anna Helene Askanasy, and Swedish feminist Elin Wägner all visited Stuhlen farm to work and share ideas with Hofstetter. She herself presented the results of her work at the Swiss Exhibition for Women’s Work in 1928, and gave a talk on “Women–Earth–Peace” at the conference of the Women’s Organisation for World Order in Bratislava in 1937.

Despite these international connections and diverse interests, Mina Hofstetter was never involved in a political organisation on a long-term basis, instead exemplifying her convictions on animal-free agriculture and gender equality to an interested community on her farm.