19 January 2021 would have been Patricia Highsmith’s 100th birthday. Her diaries offer an unvarnished insight into her life and writing.

Patricia Highsmith was born in Fort Worth, Texas, on 19 January 1921. Her parents, both graphic artists, had already divorced by the time of their first daughter’s birth. At that stage, there was no reason to suppose that her estate would one day end up in the Swiss Literary Archives. Today, her distinctive crime stories, most notably the series involving Tom Ripley, have made her one of the most widely read authors in the world, and her novels have been translated and filmed on countless occasions. During her lifetime she was a loner and – as a homosexual woman – an outsider, who screened herself off from an inquisitive public. Yet her literary estate contains diaries in which, especially during her youth, she laid bare her psychology and private life. Highsmith kept two sets of diaries. One covered her private life, and consisted of sometimes beautifully decorated books into which she also pasted all manner of mementos of her amorous affairs. A student at the time, she sometimes wrote in German, French and Spanish to protect them from prying eyes. 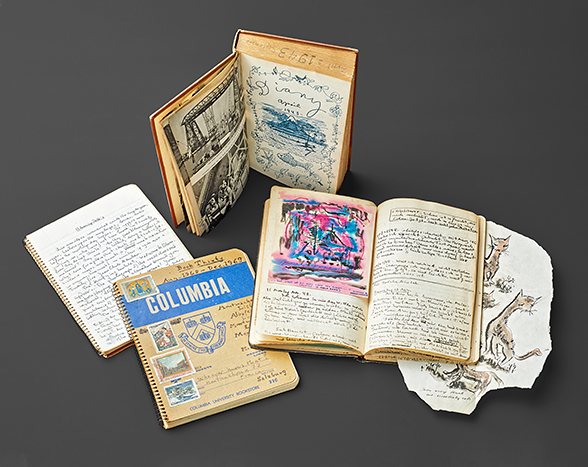 The others, which she referred to as “notebooks” or “cahiers”, related to her writing and are fascinating literary documents. Throughout her life, she used study books from Columbia University in which – again chronologically – she set down her observations of people and places, her reflections and initial ideas for her novels and stories.

Highsmith was never primarily an autobiographical writer, as her “double-entry bookkeeping” attests; yet the genesis of the novel The Price of Salt (published in 1952 under a pseudonym and later as Carol under her own name) exemplifies the close ties between her life and literary output.

The first drafts were written in late 1948, when Highsmith was 27 and working as a Christmas sales assistant in a department store in Manhattan. The initial outline of the novel was recorded in a notebook as “Bloomingdale Story”. In the draft and the finished novel, a young salesgirl named Therese Belivet falls in love with a rich female customer, and this gradually develops into a passionate love affair. The two women’s lives are turned upside down by the event, yet it also enables them to discover themselves. As the parallel diaries record, Highsmith similarly fell in love with a female customer while working in the store. In her case, however, the love remained a daydream. In the absence of the real relationship, she worked on her novel, her imaginary love spurring her on to commit it to paper.

The diaries also reveal, however, that Highsmith was anything but a wallflower, merely dreaming of love with a woman. Unlike her heroine, who discovers her homosexuality through her love, Highsmith had extensive experience of affairs with women by the time of her Bloomingdales encounter. She took the job in the department store to earn money for a course of psychoanalysis, by means of which she (half-heartedly) hoped to free herself from her homosexuality and marry her fiancé, the writer Marc Brandel. That the analysis had, if anything, the opposite effect, is a different matter.

Patricia Highsmith (1921–1995) wrote 22 novels and countless short stories. The film Carol, which was based on her novel, was in cinemas a few years ago. Her work is published by Diogenes, which has announced an edition of extracts from the “notebooks” and “diaries” for autumn 2021.

In focus: Patricia Highsmith in the SLA