Amidst the rampant consumerism of the early 1960s, the indefatigable Daniel Spoerri (b. 1930) joins the “Nouveaux Réalistes” in Paris, and finds a form of artistic expression in the poetry of the everyday. Ten years later, he gathers the artist group and its guiding light, art critic Pierre Restany, together in Milan for a “last supper”.

Leonardo da Vinci’s world-famous fresco “L’Ultima Cena” adorns the refectory of the Dominican convent of Santa Maria delle Grazie in Milan, and shows Jesus with the twelve apostles at the last supper on the eve of his crucifixion. It is a frugal repast. Jesus’s revelation that “One of you which eateth with me shall betray me” causes much commotion among the group of figures. Twenty minutes’ walk from this celebrated mural, in the busy Galleria Vittorio Emanuele II shopping arcade, stands the restaurant Biffi. On 19 November 1970 it is the venue for the “Banchetto funebre del Nouveau Réalisme”, the last supper for the “New Realists”. The mastermind behind this almost incomparably lavish Eucharist for a group of artists is the Swiss inventor of Eat Art, Daniel Spoerri. The principal actors are the “pope” of critics Pierre Restany and his disciples, the Nouveaux Réalistes: Arman, César, Christo, François Dufrêne, Raymond Hains, Niki de Saint Phalle, Martial Raysse, Mimmo Rotella, Jean Tinguely, Jacques de la Villeglé, and Yves Klein, who had died in 1962. 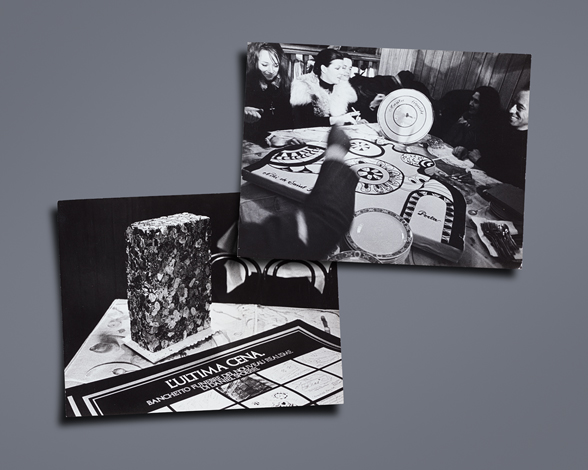 At their specially set table, Spoerri treats each member of the group – dead or alive – to a lavish supper that references their artistic oeuvre. In turn, each Nouveau Réaliste invites their own supporters to partake of the intoxicating sacrament. The menu, which doubles as an announcement of the group’s imminent demise, takes the form of a 70 x 100 cm lithograph in black and silver designed to resemble a large bereavement card. After three manifestos (1960, 1961, 1963) and the founding declaration, it is the last document signed by the Nouveaux Réalistes; the late Yves Klein’s widow Rotraut even adds an “x pour Yves” on his behalf. However, the artist group founded a decade earlier in Klein’s Paris flat never undergoes a resurrection.

Treachery against the “pope” of critics

Beginning in 1960, the French art critic Pierre Restany moulds the phenomenon that is Nouveau Réalisme and sets himself up as its chief apologist. In the founding declaration, he attempts to unite the differing styles of the participating artists through rhetoric: “The New Realists have become conscious of their collective identity. Nouveau Réalisme = new perceptions of the real”. The unity in diversity that Restany evokes is a commitment to a socially critical form of art. Amidst the prosperity and consumerism of the 1960s, the playful and ironic Nouveaux Réalistes place the banal reality of life and the detritus of the everyday at the centre of their art. They abandon the subjective forms of expression characteristic of abstraction. Yet what holds the group together is not so much Restany’s superstructure of art theory as the contacts, friendships, joint actions and exhibitions in cities ranging from Milan, Paris, Nice and New York to Cologne and Munich. Despite their success in international exhibitions in the years 1961–63, the members are critical of Restany’s wordy attempts to legitimise the artist group as a single entity. In 1961 Klein, Hains and Raysse sign a leaving declaration, but continue to take part in the group’s activities. In 1963, Arman calls for the group to “de-Restanyise”.

Cake in the form of a papal tiara for Pierre Restany, 1970 (photo: NL, Simon Schmid)

The irreverent last supper, however, once again celebrates communion. While the Christian Last Supper involves the consumption of bread and wine understood to represent the body and blood of Jesus, Spoerri’s take on the ultimate feast is entirely concerned with consuming, digesting and reflecting on the heterogeneous works of the Nouveaux Réalistes. The festive dishes are rich in associations: the accumulation artist Arman is presented with piles of eels in see-through aspic, while the dishes for “wrap artist” Christo are enclosed in aluminium foil. The main courses, though, are ambitious cake creations put together with the help of Milan-based panettone-maker Motta. The most imposing of all is reserved for Pierre Restany: a 70-cm-high papal tiara coated in white marzipan with gilded petals and coloured precious stones made of sugar icing. The artful Restany entrusts the task of cutting the cake to Daniel Spoerri; and so it is he who, on that final evening, smites the crown from the head of the critic-pope with a mighty blow of his knife.

Daniel Spoerri, born 1930 in Galati, Romania. Following a dance training, he is active as a dancer, choreographer, director and editor from 1949 until, in 1960, he embarks on a career as a self-taught visual artist. That same year he is a founder member of the artist group known as the Nouveaux Réalistes, and achieves international recognition with his “tableaux-pièges” (snare pictures). Starting in the 1960s, Spoerri makes a name for himself as a food artist, and is the founder of Eat Art.

Sixty years after the first festival of Nouveau Réalisme in Nice, the city’s Museum of Modern and Contemporary Art (MAMAC) presents a comprehensive overview of its Swiss exponent Daniel Spoerri, including numerous loans from his archive.

Daniel Spoerri archive in the NL

Action art by Daniel Spoerri in the HelveticArchives database

Event documentation on Daniel Spoerri in the HelveticArchives database