Through his work and perseverance, artist and architect Bryan Cyril Thurston played a part in stopping the Greina plateau in Graubünden from being flooded by the construction of a storage reservoir in the 1980s and in getting it listed in the Federal Inventory of Landscapes and Natural Monuments of National Importance (ILNM). The saving of the “Plaun la Greina” is now considered the epitome of a successful campaign against landscape destruction. 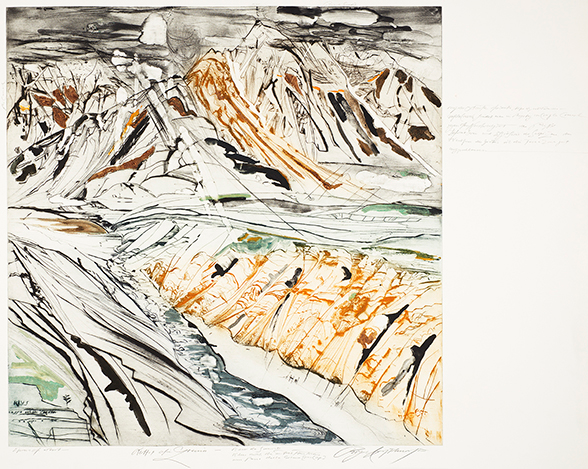 Bryan Cyril Thurston has always harboured a deep connection to nature that dates back to his adolescence in England and Scotland. He would often travel to deserted areas, where he was drawn to and inspired by the solitude and vast expanse of the landscape. When he arrived in Switzerland in the 1950s, he sought these sorts of natural havens in the Alps, and the Greina plateau was one of his favourite spots. For him it was an opportunity to escape the bustle of everyday life and to recharge his batteries through the vast yet vibrant stillness.

Thurston describes unspoiled nature as  “a source of human and artistic inspiration”. These feelings and impressions come across in his works, for example in his graphic print “Rettet die Greina!” (Save the Greina!). The natural landscape is lifted by the vivid lines of the drypoint and colour, while the jagged Alps tower in the background. Thurston’s pictures are intended to give the onlooker a sense of the beauty of untouched nature and to bring his love of the mountains to life. 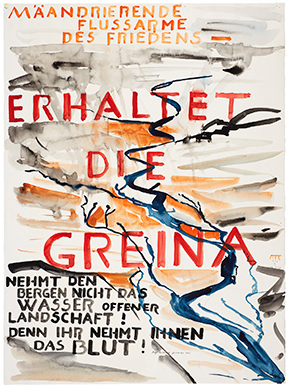 The Greina plain, over which one of the oldest Alpine passes runs, has been well-known throughout Switzerland since the 1970s when a hydropower plant with storage reservoir was to be built in the unspoiled mountain landscape. This led to protests and demonstrations throughout the country and ultimately to the establishment of the Greina Foundation, in which Thurston was also heavily involved. Over the next 20 years, he campaigned for the plateau by giving interviews, designing posters and creating artistic works which he exhibited. In the course of the Greina movement, Thurston published the book “Greina – Wildes Bergland” (“The Message of the Greina”) to which he contributed a number of works and essays.

In his engagement with the mountain landscape, there is a strong emphasis on the “unspoiled character” of nature. Using an array of techniques, such as drypoint, aquatint, lithography, etching and watercolour, Thurston produces impressive landscape scenes that captivate the onlooker.

As a result of the political and artistic engagement of several figures, the storage reservoir project was ultimately abandoned in 1986. The Greina Foundation remains relevant to this day and works to preserve this and other landscapes that are worthy of protection. 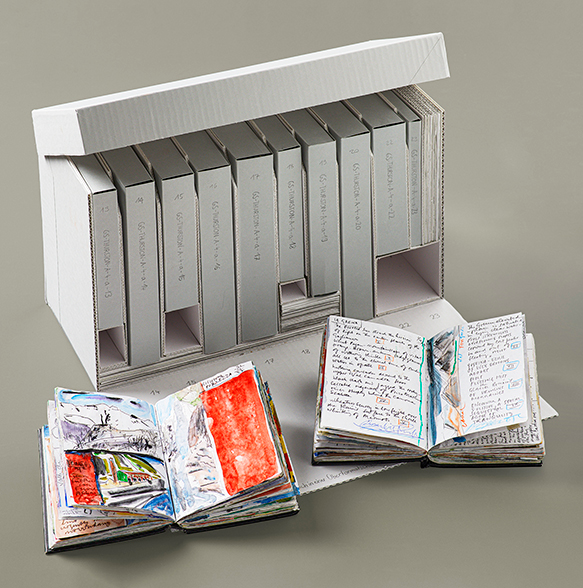 Thurston’s artistic interest in the Greina plain is also clear from his sketch and art books. The artist always carries a sketchbook with him during his study trips in Switzerland and abroad, in which he records his thoughts in the form of poems, sketches and artistic interpretations. These mostly small-format pocket books provide an insight into the artist’s interests from the late 1980s.

In the just under 200 sketchbooks archived in the Prints and Drawings Department at the Swiss National Library, we can pick out recurrent motifs, with a clear focus on observations of nature, and particularly mountain landscapes, in addition to the seemingly organic architectural studies. His works demonstrate a great willingness to experiment and range from naturalistic depictions to abstract interpretations. The artist’s unifying theme is the constantly evolving process of nature, from becoming to being to passing away. In addition to Scottish and English landscapes, his regular spots to visit were Ticino with its valleys, as well as Bregaglia and the Italian Alps. For example, there are sketchbook entries on these regions, as well as graphic prints and watercolours, which are understood as a nod to role models such as Giovanni Segantini and Alberto Giacometti.

Bryan Cyril Thurston was born in Leiston, England on 20 September 1933. He studied architecture at Willesden Technical College in London and obtained a diploma from the Royal Institute of British Architects, RIBA. He moved to Switzerland in 1955 and set up his own architecture and painting studio in 1976. He also co-founded the working group “Wind”. In parallel to his work as an architect, his artistic work remains an integral part of his activity, which he continues to practise extensively into old age. 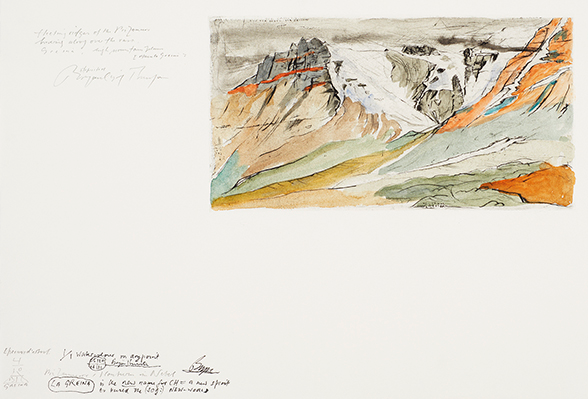 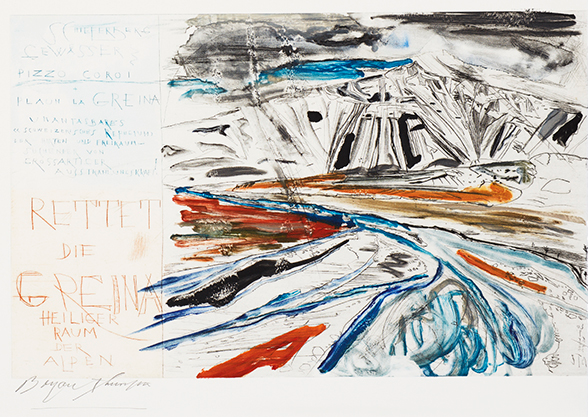