In the 1890s survey photography, a Prussian invention, came to Switzerland. The archive of Rudolf Fechter in the NL reveals the passion and sense of purpose with which Switzerland’s built heritage was documented at the time, and how that aided the inventorisation of historic monuments. 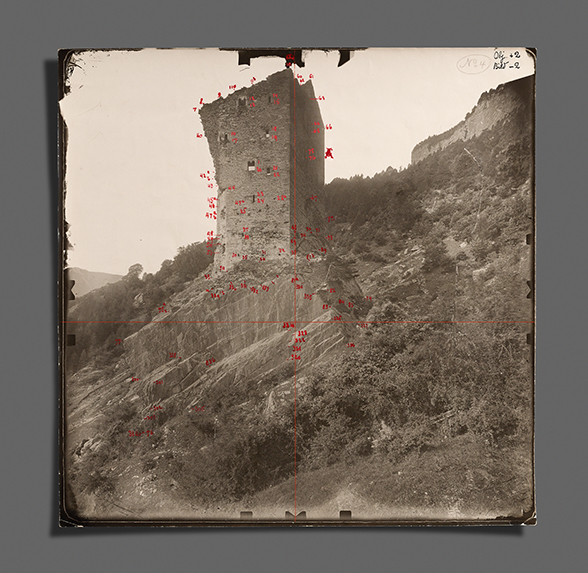 One of the first photograms made in Switzerland: the ruins of Haldenstein Castle with measurement points and data, 1896

When Rudolf Fechter stands before the ruins of Haldenstein Castle near the city of Chur one day in 1896, the weather is decidedly average. He notes: “Quite overcast. Not much sun.” Nevertheless, he takes 40 photographs and meticulously records the columns of figures that make up his measurements in his notebook. Fechter, who was born in Basel in 1840 and died there in 1902, trained as an architect as his second career, and devoted himself to the built heritage of his native land. As a board member of the Swiss Society for the Preservation of Historic Art Monuments, the predecessor of the Society for Art History in Switzerland, Fechter pours his heart and soul into the job, and is a pioneer in the use of a novel method of measuring buildings in Switzerland: survey photography.

Prussia: a hub of innovation

The technique had been developed in around 1865 in faraway Prussia. At the time, the prominent German state was a hub of business innovation, with vast numbers of patent applications driving the progress of technology and industry. Amidst it all, Albrecht Meydenbauer was caught up in the wave of invention: in the Brandenburg town of Rathenow, he and the outward-looking Emil Busch worked in the latter’s optical instruments firm on a way to photograph buildings and measure them at the same time. The “Pantoskop”, a wide-angle lens developed by the company, was the breakthrough that led to the introduction of photogrammetry. There followed an unprecedented campaign of photographing historic buildings, which ultimately spread to Switzerland as well. 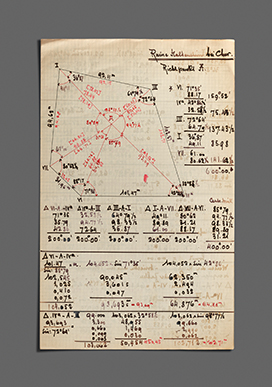 Length and angle measurements of the ruins of Haldenstein Castle based on survey photographs, 1896

It was Meydenbauer himself who, together with Fechter, made the first Swiss photograms of buildings in the canton of Graubünden. Look at the impressive ruin of Haldenstein Castle set amidst rocky terrain and the sheer drops from its walls, and the effectiveness of the new technique becomes abundantly clear: surveying the stonework on the building itself would have been a highly perilous undertaking. From a distance, however, set up at convenient locations, Meydenbauer’s technically enhanced camera could take picture after picture without the terrors of scaling the actual construction. He was able to produce extremely sharp negatives on glass plates, complete with measurement points, that are known as photograms or survey photographs. These formed the basis for a geometric architectural drawing created using a range of mathematical calculations.

Fechter: champion of photogrammetry in Switzerland 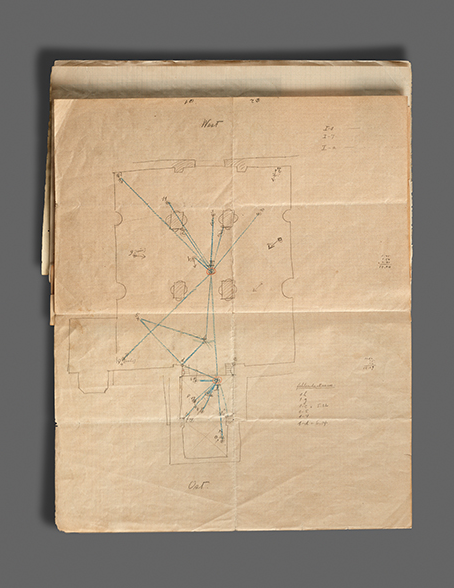 Ground plan of Chur Cathedral showing the location of the camera and angle of view, 1896

Fechter and Meydenbauer’s time together in Graubünden had a lasting impact on both men: they continued to correspond until 1900 – mainly, of course, about the finer points of photographic technique. The Society for Photogrammetry (and Remote Sensing) was founded in 1928 and the ETH Zurich began offering university courses in architectural photogrammetry in the 1930s, by which time the technique was firmly established in Switzerland. Fechter’s heirs had donated his estate to the Archive of Historic Art Monuments at the Swiss National Museum in 1917, including two “Meydenbauer cameras”. In 1977 these were transferred, along with Fechter’s literary estate, to the Federal Archives of Historic Monuments, which has been part of the Prints and Drawings Department at the National Library since 2007. They are the only known surviving examples anywhere in the world of this remarkable Prussian invention, a triumph of technology that revolutionised building photography and laid the foundations for the documentation, restoration and reconstruction of historic monuments.

Albrecht Meydenbauer, the centenary of whose death is marked in 2021, was born in 1834 in the Saarland town of Tholey. In his function as a privy counsellor responsible for buildings in the Prussian Ministry for Intellectual Affairs, the civil engineer tirelessly promoted the pictorial documentation of historic buildings; the extensive pictorial material formed the basis for the Royal Prussian Survey Photography Institute, the first of its kind anywhere in the world, of which Meydenbauer was the inaugural director.

The Rudolf Fechter Archive in the HelveticArchives database

The survey photograph archive in the Brandenburgisches Landesamt für Denkmalpflege