The “Kursaal” (an entertainment hall, especially in a spa) is a building type that is often overlooked in architectural history. The valuable collection of original plans for the Kursaal Interlaken have been held by the Prints and Drawings Department since 1983. The plans, which were elaborately designed by Neuchâtel architect Paul Bouvier between 1897 and 1910, illustrate the great importance of leisure activities at the dawn of the 20th century. 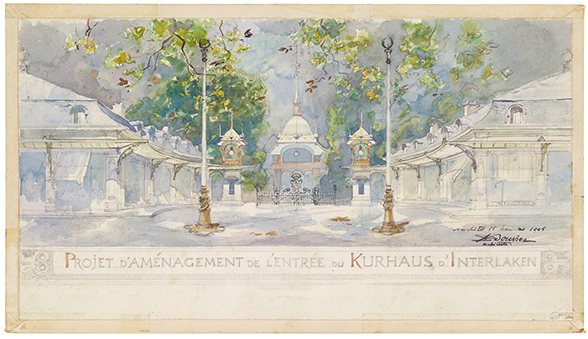 In the heyday of the Belle Époque, Neuchâtel-born architect Paul Bouvier (1857–1940) made a name for himself in the field of “ephemeral architecture”, for example by designing pavilions for national exhibitions. The architectural language developed through this work – featuring motifs such as ridge turrets and Bernese style curved gables (“Berner Ründe”) – inspired Bouvier in his main oeuvre, the Kursaal in Interlaken. This new building replaced the previous one from the founding period in stages from 1902.

Whey cures and petits-chevaux in the first Kursaal

Tourism, which emerged in Switzerland around 1850, triggered a hive of construction activity. As well as railways and hotels, a number of Kursäle appeared, which often formed the heart of a spa resort with their prestigious design. Through their markedly “fashionable” architecture, Kursäle also projected a certain image of the spa in question.

The history of the Kursaal Interlaken dates back to 1858, when a group of citizens acquired the site of the former Augustinerkloster “inter lacus” to build a whey spa as well as a casino with a spectacular view of the Jungfrau. The whey spa opened as early as 1859 and was a construction entirely made of wood which was probably designed in the chalet and parquet factory in Interlaken and was in part industrially prefabricated.

However, the delight at the new building and the social life that emerged there which was closely linked to gambling, did not last long Just one month after it opened, the Kursaal was closed due to the ban on gambling. Despite this blow, the people of Interlaken set up a Kurhausgesellschaft, which allowed operation to continue. Since 1883, the game of “petits-chevaux”, in which players bet on races between little metal horses on a circular track and which was still permitted despite the ban, has been a lucrative source of revenue. 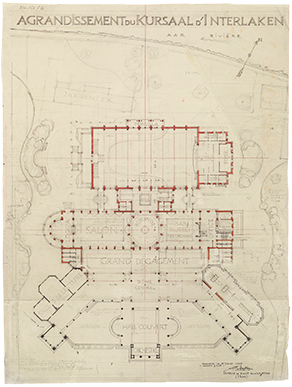 In 1898 the whey spa was closed due to inadequate hygiene. The time had come for the building to be transformed into purely a venue for social functions. Various architects were called on, including Paul Bouvier, who had enjoyed great success with his “Village Suisse” at the national exhibition in Geneva in 1896. He submitted his plans later that year.

The around 360 plans and sketches that are held in the Prints and Drawings Department show that no expense was spared in the plans for the Kursaal. Some of the plans use watercolours, while others feature gold paper or stuck-on chandeliers to better illustrate the desired effects. Gottlieb Mey, the architect who designed the music pavilion and member of the Kurhausgesellschaft, commended the project, saying: “ […] beautiful domed structure […] the motifs used are authentically Swiss, and specifically Bernese. Opulent glass and other paintings will lend the whole thing a very stylish look.” 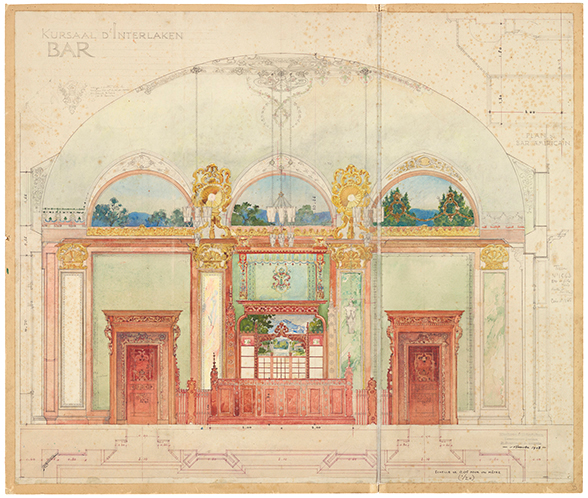 In the extensive grounds, Bouvier planned a complex with a diverse use of space, which as a whole was reminiscent of palatial architecture. Via expansive terraces, visitors would first enter the “hall couvert”, flanked by wide galleries, from which they would pass through the central dome structure into the grand lobby which linked to the lounge and elegant bar. The sumptuously decorated concert and theatre hall could be accessed via a diagonal hallway.

Although Bouvier was not from Interlaken, he drew on local architectural styles in his plans, utilising the features of the landscape and including regional architectural elements, such as Bernese curved gables and ridged turrets. For the interiors he used artisanal techniques that are known from the manufacture of rustic furniture, such as carvings and wood brandings painted with oils.

In addition, Bouvier was inspired by interior design and decorative art from all over the world. Besides the majestic colours of the red stucco marble, and the cream and gold tones found throughout the building, there are also neo-baroque stucco works, art nouveau-style floral motifs, classical coffered ceilings with dark blue panels in the games hall, and motifs from the Far East. To top off this opulence, light bulbs were lavishly fitted in the rotunda and theatre hall. This diversity makes the Kursaal Interlaken one of the most interesting examples of the stylistic melting pot at the turn of the 20th century, combining and blending a wide variety of architectural styles.

Paul Bouvier was born in Neuchâtel in 1857 and died there in 1940. After studying in Switzerland, he switched to the Ecole des Beaux Arts in Paris, where he obtained his diploma in architecture and art in 1877. He travelled extensively in Italy, France and North Africa. From 1887 he specialised in exhibition architecture. After completing the work on the Kursaal Interlaken, Bouvier dedicated himself to painting from 1910. He was socially well connected, among other things as a member of the Federal Art Commission between 1907 and 1909. 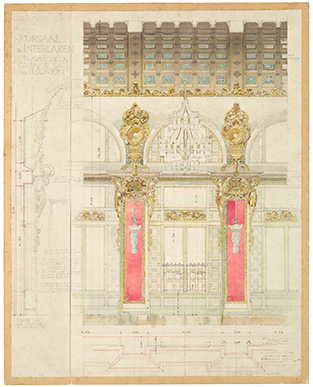 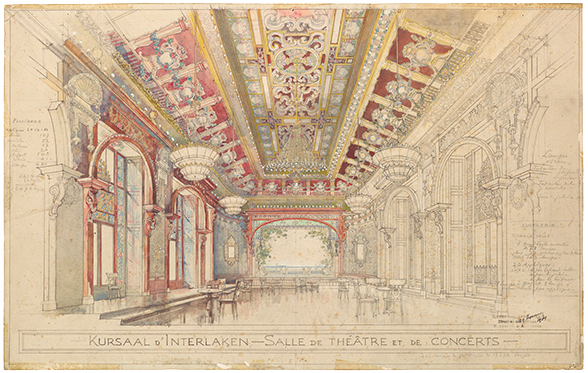 Kursaal Interlaken, theatre and concert hall with electric lighting that was spectacular for the period, pencil and watercolour, P. Bouvier, 1909 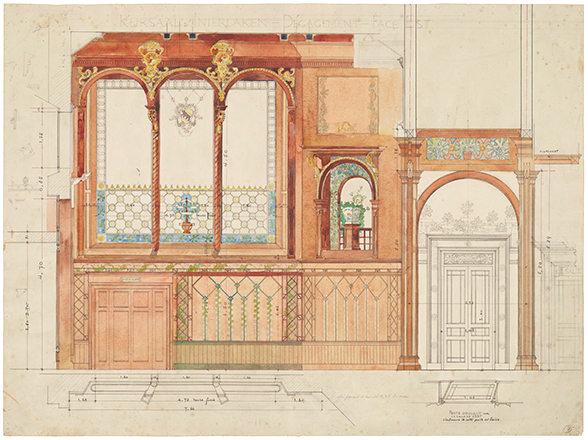