With humour and a sense of fun, but also a healthy dose of rage, Doris Stauffer (1934–2017) spent her life championing feminism and women’s rights. The Swiss National Library documents her artistic works, political and educational speeches, texts, courses and other projects, such as the cheeky swimming trunks campaign.

A big discussion about a little garment 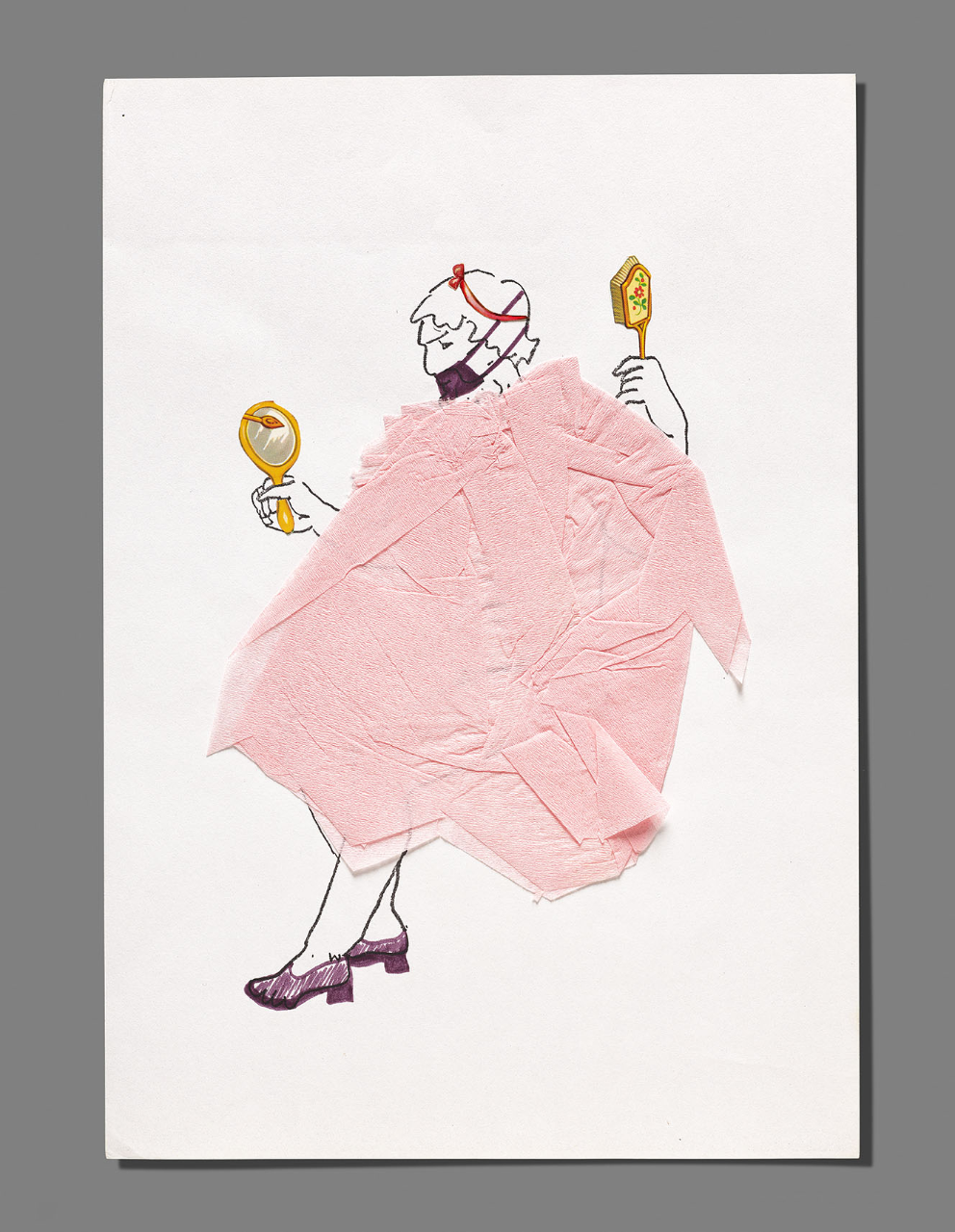 In 1978, the Bern judicial authorities decided that they would no longer treat ‘the exposure of women’s breasts‘ in open air pools as a punishable offence against public decency.  In response, conservative circles called for a “campaign for dignified swimming baths” and the launch of a popular initiative against the “neglect of bathing customs”. The referendum “against bare Bernese breasts” (“Gegen blutte Berner Busen”), as the then Migros weekly paper “Die Tat” dubbed, was a real gift for artist and activist Doris Stauffer, who dedicated her life to fighting for women’s rights by giving talks, writing articles and organising demonstrations.

In response to the bare breasts scandal, Stauffer wrote an acerbic open letter to the editor of Elle magazine (no. 16/1978), calling for “dignified swimming trunks”. She reversed the accusation that women would be committing an offence against public decency, instead accusing men in an exaggerated way of offending the moral sensibilities of women and children not only in swimming pools but also in everyday life “through provocative displays of beards, hairy body parts and prominent genitalia”. She called for “an immediate ban on these activities”. In addition, in the women’s workshop she had set up, she and her fellow demonstrators created collages of original “männerwürdige Badehosen” (dignified swimming trunks for men). 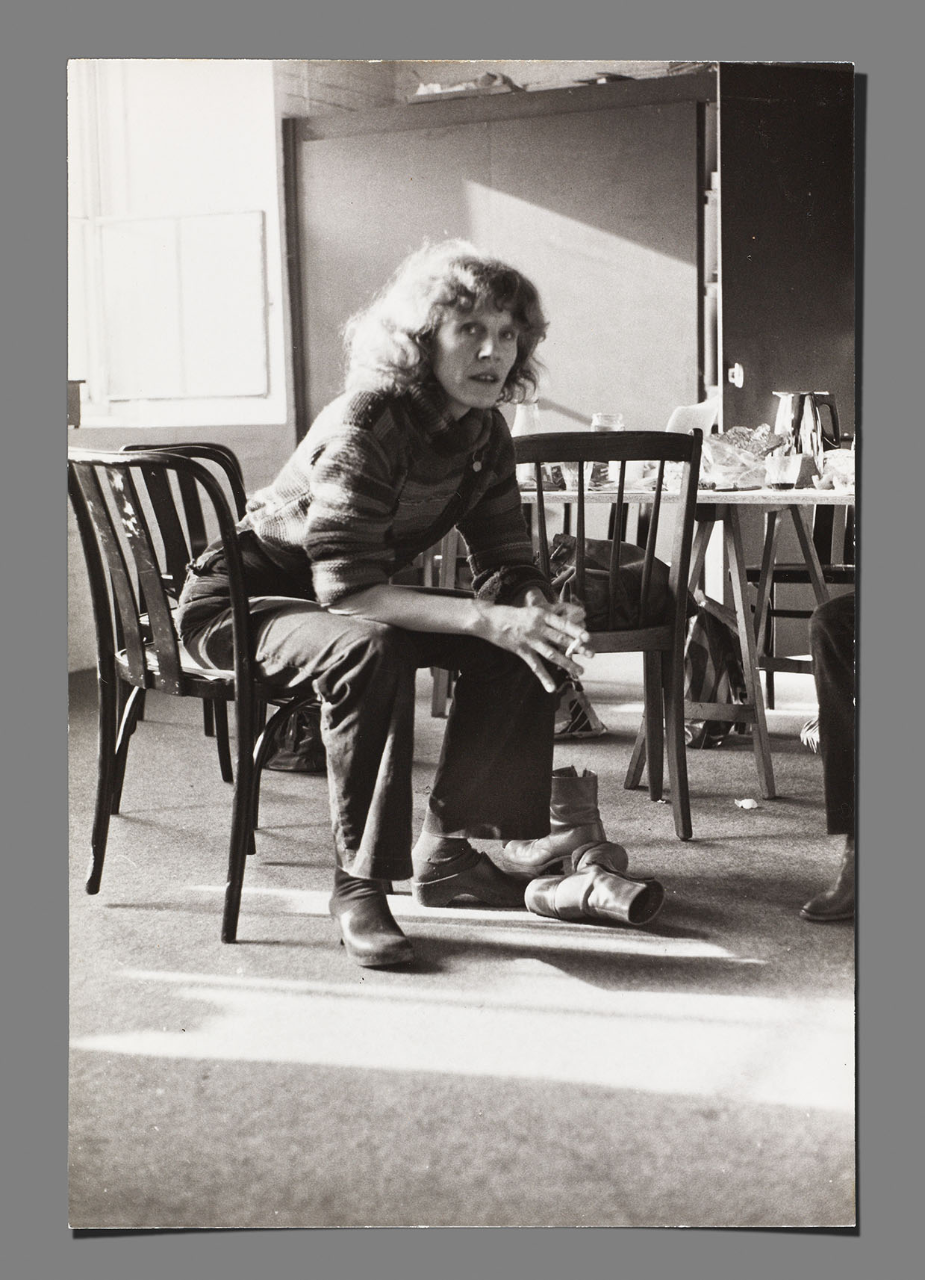 Doris Stauffer in the women’s workshop, portrait, anonymous, circa 1978

The so-called swimming trunks campaign is just one of Doris Stauffer’s many unconventional initiatives. After training as a photographer at the Zurich School of Applied Arts, she married artist Serge Stauffer at a young age and already had three children by the age of 25.

While caring for her young family, she created assemblages of everyday objects which she would transform and cast in a new light. But she grew increasingly frustrated with her day-to-day life and became more involved in the equality and emancipation movement from 1969 onwards, which earned her the nickname ‘Emancipadoris’. As she herself admitted, she was something of a rebel. But at the same time, she called for humour and light-heartedness in the fight for women’s rights, which is reflected in her performances and artworks. 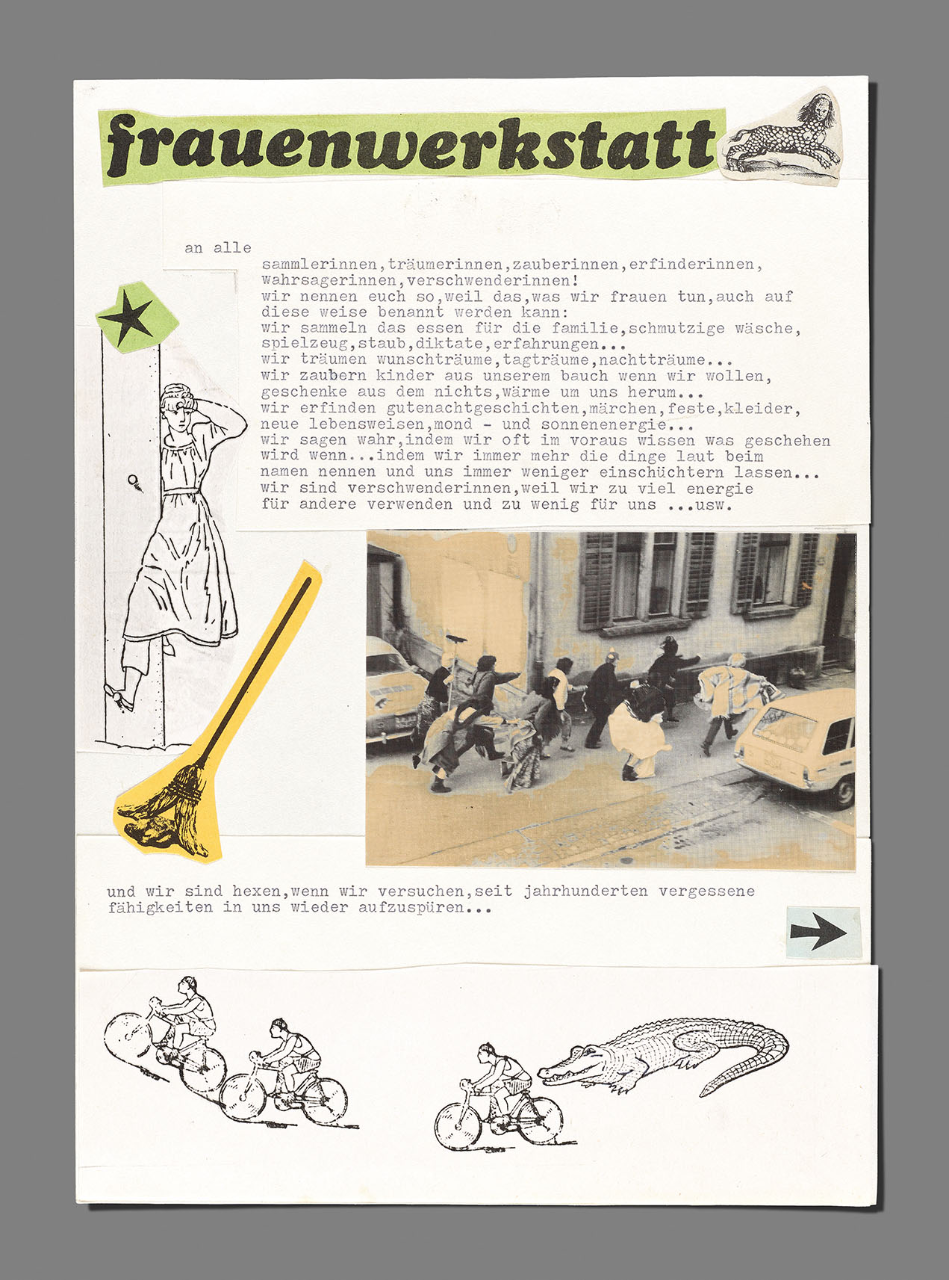 Besides her political activities, Doris Stauffer also worked as a teacher. In 1969, she started teaching the subject “teamwork” in the colour and form experimental class at the Zurich School of Applied Arts. Her aim was to eliminate competitiveness and individualistic approaches and replace them with collective working. She set up a class council, was on first name terms with her students, and encouraged group activities and free improvisation. The school management did not appreciate this approach and the class was stopped in 1970. In February 1971, the F+F School of Experimental Design Zurich was opened on a private basis. From then on, Doris Stauffer was able to impart her ideas freely and without interruption and address the situation of women in the art scene through workshops.

In 1977, Stauffer started teaching witches courses at F+F, which were only open to women. The courses allowed participants to share experiences, develop self-confidence and explore their creativity through discussion and practical work using different media (spatial, two-dimensional, video, photo, etc.).  The courses went against the F+F school policy, so in 1978, Doris Stauffer rented a factory floor, where she continued to teach the witches courses in what was known as the ‘women’s workshop’, which was ultimately behind the swimming trunks campaign.

Doris Stauffer’s artworks are held at the Aargauer Kunsthaus.

Visuals, texts, films and audio documents on the history of the F+F School of Art and Design in Zurich.