Ernst Linck was a leading light of the Bern art scene in the early 20th century. But as his works steadily disappear, his name is being forgotten. Only the mural of the “Standard-bearer” near Bern’s clock tower (Zytglogge) still remains. 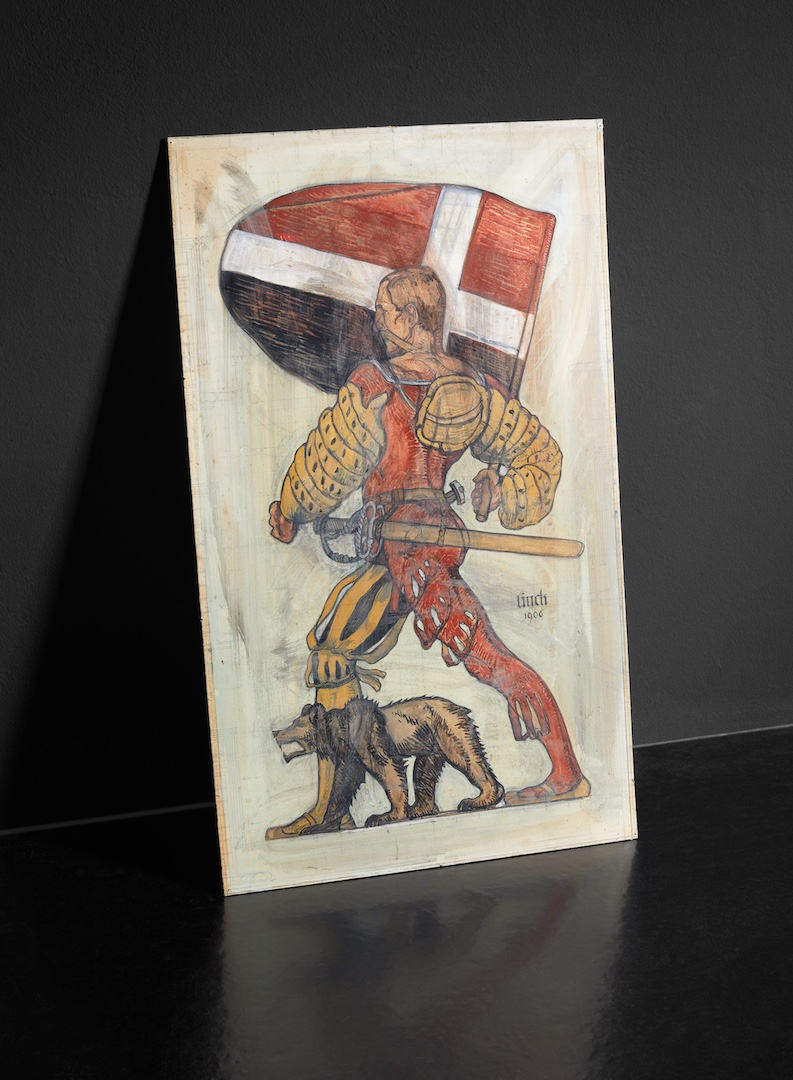 The monumental “Standard-bearer” on the side of the Brunnerhaus, which is a stone’s throw from Bern’s clock tower, is probably the only work by Ernst Linck that is still reasonably well known, not least thanks to its size and location. It is therefore surprising that the “Standard-bearer”, which was painted in 1906, does not represent the high point of Linck’s career, but his early days on the Bern art scene.

The oversized flagship work paved the way initially for his ornamental and colourful decoration of many Bernese churches. This in turn led to glass painting work in the form of stained-glass windows for churches and ultimately brought other assignments involving the painting of public places in Bern. Seven years after the “Standard-bearer”, Linck was awarded another prestigious assignment at a prominent location in the Swiss capital. He was commissioned to design the mural paintings for the service hall in the then Saving and Credit Bank (now Valiant Bank) on Bundesplatz. Above the entrance there were to be five frames, with a Bern coat of arms in the middle, a seated couple to the left and right, flanked on the outside by three workers in conversation. Above an arch to the left of the entrance were two additional frames, each featuring a worker to complete the trio of the agricultural worker, construction worker and industrial worker. 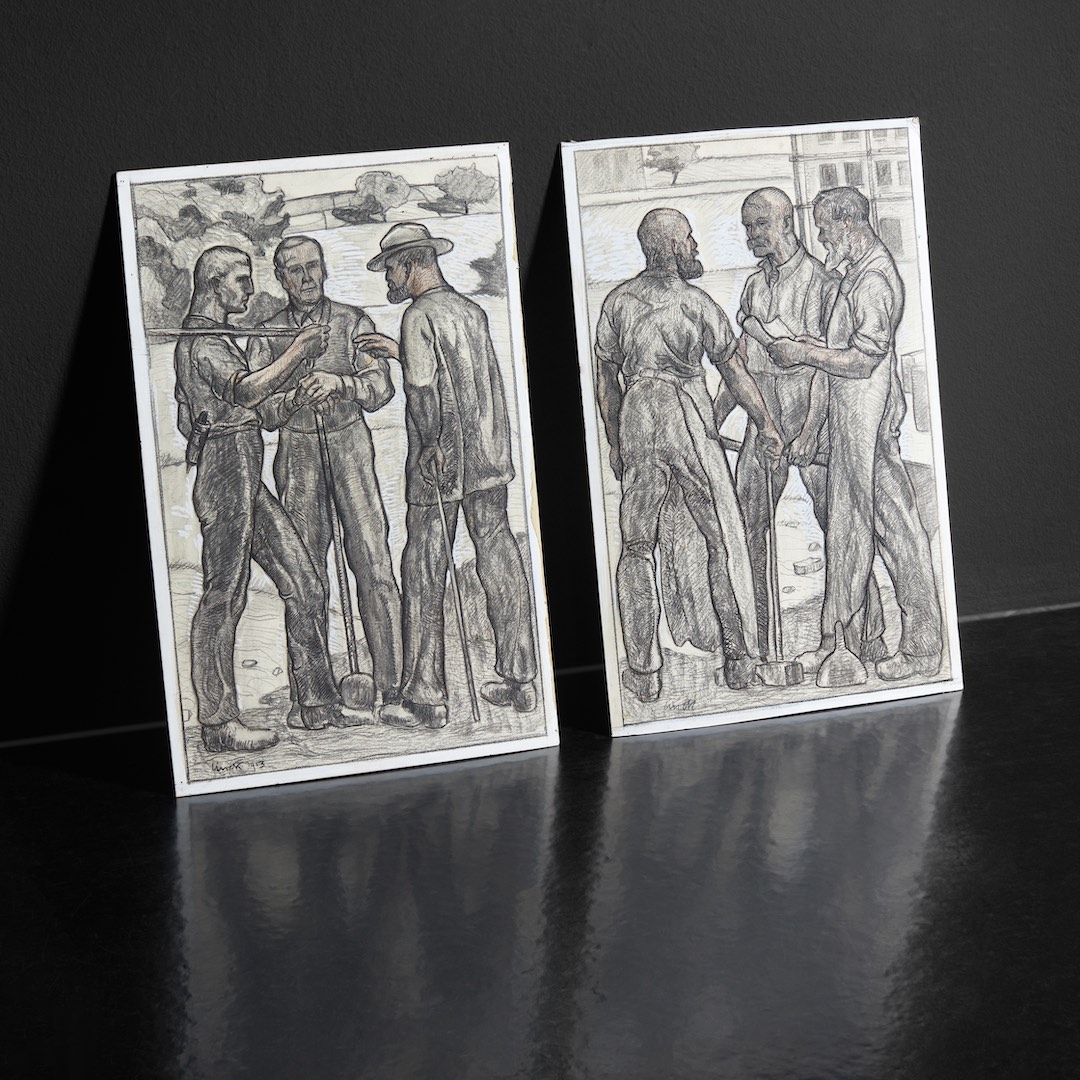 Together with the “Standard-bearer”, the paintings in the former Saving and Credit Bank are perpetually cited as illustrative examples of Linck’s public works in Bern. Over the subsequent years, other projects joined them: mural paintings in the Bürgerhaus in Bern in 1913, various works at the Swiss National Exhibition in 1914, a large mural painting in the Kursaal in 1914, works in the Volkshaus  in 1915, the staircase window in the Bern fire insurance company in 1920, wall paintings in the Variété Corso in 1927, and a contribution for Switzerland to the International Exhibition in Paris in 1925. In 1929, the Kunsthalle Bern ran an exhibition on the wall and glass paintings of Bernese artists, where Linck dominated with 31 exhibited works, including the sketches for the “Standard-bearer” and the work commissioned by the Saving and Credit Bank.

As early as 1903, Paul Klee wrote in his diary about Linck and the other teachers at the Bern school of art and design “they’re all trying to be Hodler to some degree”. He thus pre-empted Linck’s later friendship with his role model Ferdinand Hodler, and after Hodler’s death in 1918, Linck became the main proponent of the Hodler school. At the same time, Linck rose to become the chairman of the Bern division of the Swiss Association of Painters, Sculptors and Architects and became a valued member of the Swiss Werkbund (association of craftsmen). Until his death in June 1935, he remained a leading figure on the Bern art scene. 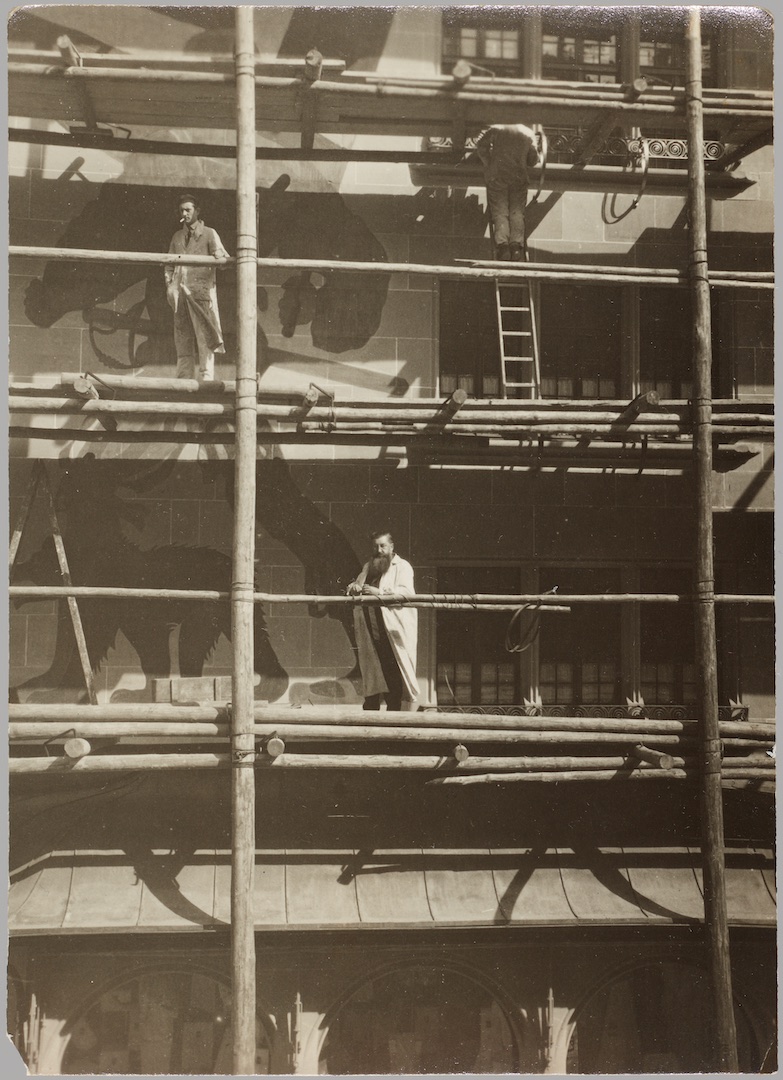 After a final tribute with an exhibition at Bern’s Kunsthalle in July 1935, again prominently featuring the sketch of the “Standard-bearer”, Ernst Linck’s legacy steadily shrunk: the Kursaal and the Variété Corso were demolished, the Bürgerhaus and the Kaiserhaus were converted into offices, and the Volkshaus became the Hotel Bern.  The frames in the Saving and Credit Bank were removed during renovation work in the 1970s and replaced with modern works. However, as his other works in Bern gradually disappeared, the “Standard-bearer”, which Linck restored himself in 1929, stoically remained. Nevertheless, Linck’s work remains ubiquitous today, even if you’ll rarely see his signature. For example, he was responsible for painting Bern’s historic fountains and restored the works of the Bernese carnation masters in the cathedral, and the paintings by Hodler in the Kunstmuseum. The most striking examples of his work are to be found in Bern’s many churches, for which he created stained-glass windows and stained-glass coats of arms.

The Ernst Linck archive at the NL contains sketches and studies on Linck’s various projects, as well as photographs, letters and personal papers that offer an insight into his multifaceted work.

Ernst Linck was born in Windisch (AG) in 1874. He completed an apprenticeship as a decorator and attended Albert Freytag’s school of painting. From 1899 he settled in Bern, ran his own painting school and gave life drawing evening classes at the Bern school of art and design. He died of a heart attack in Bern in 1935 at the age of 60. Ernst Linck is father of the sculptor Walter Linck (1903-75) and stepfather of the ceramic artist Margrit Linck-Daepp (1897-1983).