During her stay as artist-in-residence in the Venice studio of the Istituto Svizzero di Roma in 2002, Fiorenza Bassetti created a series of images of women, her “Donne di Venezia” (Venetian Women). That same year, alongside these images with their highly elegant feel, she also produced two powerful images of men, both of which she titled “Il Pugile” (The Boxer). While at first sight these two series may seem diametrically opposed, in fact they have something in common…

Twenty years ago, namely in 2002, artist Fiorenza Bassetti traveled to Venice where she spent half a year as the artist-in-residence in the studio of the city’s Istituto Svizzero di Roma. On returning to Switzerland, she brought with her, among other things, a series of nine images of women, the “Donne di Venezia”, as well as the “Pugili”, two images of boxers, the pugilists. Several factors strongly influenced her creation of these figures, whereby both series are bound up with aspects of Venetian art history. Both the “Donne di Venezia” and the “Pugili” were the product of and based on prior intense research that Bassetti conducted while exploring Venice’s museums.

Influence of major past figures in Venetian art

During her stay in Venice, Fiorenza Bassetti was also inspired by US patron and art collector Peggy Guggenheim. In 1948, the year Bassetti was born, Guggenheim had initiated the acquisition of the Palazzo Venier dei Leoni on the Canal Grande, which now houses the Peggy Guggenheim Collection. Moreover, during Bassetti’s stay in Venice, the Istituto Svizzero di Roma hosted an exhibition on photographer Ernst Scheidegger that also included portraits of Alberto Giacometti. Forty years prior to Bassetti’s stay in Venice, namely in 1962, Giacometti had been invited to showcase a group of paintings and sculptures in the main pavilion of the Biennale di Venezia. Among them were his “Femmes de Venise”, which he had produced in 1956. Giacometti’s works were thus a key source of inspiration for Bassetti’s version, which bears the Italian name of “Donne di Venezia”.

Bassetti’s “Pugili” likewise reference an artist who was active in Venice: They are an homage to glass artist Archimede Seguso. In the 1930s and 1940s, the latter not only made traditional glass objects and vessels, but also produced figures of boxers, among other things in recognition of the achievements of Italy’s Primo Carnera, at the time world heavyweight champion. Various of these glass figures Seguso created regularly went on show in international art exhibitions in Venice. 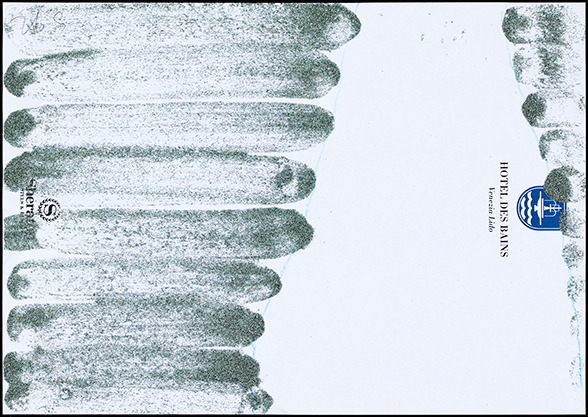 At the end of her stay in Venice, Fiorenza Bassetti was busy applying her impressions and research: She produced the “Donne di Venezia” and the “Pugili” in parallel to each other. Both series were made on writing paper from Venetian hotels: The “Donne di Venezia” consist of a series of nine images of women. Each of the images is about 297 by 84 cm. And each is respectively made up of 40 or 80 sheets of writing paper from renowned Venetian hotels in which Alberto Giacometti is known to have stayed during his various trips to Venice. The two images of boxers are likewise constructed from a unity of 4 by 20 sheets of writing paper. In Bassetti’s boxers we can discern the glass boxers created by Archimede Seguso. It is noticeable that in both series Bassetti adopts the formal properties of her respective template, meaning Giacometti’s slender figures with their lengthened limbs, and the powerful, broad-shouldered boxers Seguso made.

Giacometti’s “Femmes de Venise” exist in both bright and dark sculptural versions, both with coarse surfaces. By contrast, Fiorenza Bassetti consistently chose a white, smooth paper silhouette with a black background created using a sepia dye for her “Donne di Venezia”. Bassetti’s “Pugili” are drawn using silicon carbide and consist in each case of a coarse-grained black figure on a white background. By contrast, Archimede Seguso’s figures of boxers rely on the smooth material of glass, but again there are bright and dark versions.

Forging a bridge between past and present 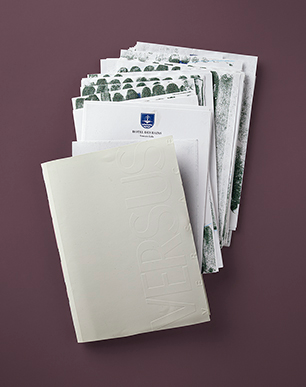 Fiorenza Bassetti did not want her nine “Donne di Venezia” to eclipse the two “Pugili”. Rather, in both series we see her working through her time in Venice, linking her own artistic output to that of other artists whom Venice impressed and influenced. For Bassetti, the two series are of equal importance, even if the two emphasize the stereotypical strengths and contrasts of the respective gender: The “Donne di Venezia” are slender, elegant, self-confident women, the “Pugili” powerfully built, strong and muscular men. With these new works that she created during her stay in Venice, Fiorenza Bassetti highlights just how we can recall past artists and in doing so forge a bridge from the past to the present.

Fiorenza Bassetti, born in 1948 in Sorengo, lives and works in Bellinzona and Zurich. Studied from 1970 to 1974 at the art academies in Paris, Rome, and Milan; graduated in 1974 in painting. Took advanced courses in engraving in Urbino, Venice, and Paris; attended classes in experimental computer imaging at the School of the Art Institute of Chicago. Worked from 1989 to 1990 at the atelier of the Centre genevois de gravure contemporaine. 1995: awarded a SPSAS (today Visarte) stipend. 1996: won the Società Ticinese di Belle Arti (STBA) Photography Prize. 1998: stayed at Istituto Svizzero di Roma in Rome; 2002 and 2004: artist-in-residence at Istituto Svizzero di Roma in Venice. 2003: awarded a Centro Studi Ligure per le Arti e le Lettere stipend in Bogliasco, Italy. 2010: first artist from Ticino to be selected for the Sophie and Karl Binding Foundation support program.